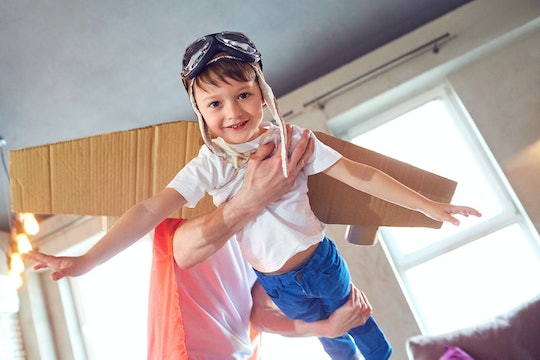 15 Superhero Nursery Ideas That Are Out Of This World

Superhero movies seem to dominate the box office every summer, and it's no wonder why — they're fun, exciting, and the good guy always wins. That also makes superheroes an awesome theme for a nursery. Whether you're into Batman, Superman, or the Avengers, there are so many fun superhero nursery ideas to create an amazing room for your baby.

Superheroes have been around since the 1930's, when both the Phantom and Superman debuted in comics, according to the Guinness Book of World Records (and clearly they're not going out of style anytime soon). Superheroes are only getting more popular these days, as studios like Marvel and DC compete to churn out blockbuster movies every year. And while the world of superheroes has long been dominated by men, women superheroes are starting to shine, too.Wonder Woman was a massive success back in 2017, earning a sequel that's due out next year according to Elle. And Brie Larson's Captain Marvel is sure to be a smash next year — perhaps she'll save the world?

So whether you're decorating for a little Superman or Batgirl in training, there's sure to be a superhero they'll love looking up to. Here are 15 adorable superhero nurseries to inspire you: