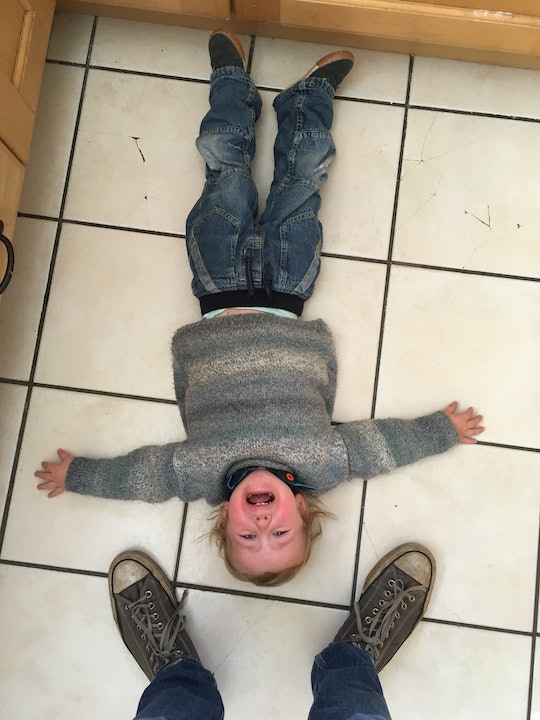 Canada Isn't Real, & 15 Other Absurd Arguments Parents Have Had With Kids

Whoever established "talking to a brick wall" as the height of frustrating conversations clearly never attempted to argue with a child about whether or not their top is on backwards. These kinds of "debates" are a mainstay in parenthood, with the flow of logic switching moment to moment like the wind — I'm thinking about the time my son asked me to take him to the Bronx Zoo for his birthday, then sobbed for 45 minutes at the gates and refused to go in.

But let us all take comfort in the knowledge that we are not alone: They're all like this. Whichever way you cut those carrots, whatever the weather, children will find absurd reasons to take issue with how the world is, and likely hold you responsible (the ocean is cold? How dare you!).

I spoke to 16 parents about the most absurd argument they can remember having with a child, and these conversations are truly the Oxford debates of Bizarro World.

"The time I forgot to let my 3-year-old daughter flush the toilet after she used it (but before I did) and we had a meltdown for an hour about how mean I was because I 'peed on her pee.' It’s pretty funny now but at the time I was struggling for sure."

"My husband and my son got into a huge fight about how his poop needed saving from the water because they didn’t know how to swim! It was a 20-minute ordeal in the Chipotle bathroom! You could hear my husband trying to explain that we don’t need it anymore and this sweet little 2-and-a-half-year-old trying to explain that they will drown if Daddy doesn’t save them."

"I once had a fight with my daughter over the fact that should could not have my nipples. She was screaming, "Just give me your nipples, Mama!" She was 4. I eventually asked her why she needed my nipples and she said she wanted to eat them like pepperoni. What a confidence booster."

"When my boys were 3, they were getting ready for bed and one of them hit full panic mode because he thought his nipples were disappearing because they weren’t erect, like his brother's. It took far too long to calm his ass down and convince him that his nips weren’t going anywhere."

"My 6-year-old cannot be convinced that ducks can fly. He insists they can’t. Even after I show him YouTube videos of ducks flying. 'Those obviously aren’t ducks.'"

My son ... was absolutely certain that Canada was a fictional place made up by his parents, like Narnia with maple syrup. We showed him maps and pictures. It didn’t persuade him.

"I think my all-time most ridiculous, hilarious argument was when she kicked the cat out of her room at night because he peed on her floor. Like, multiple days in a row. I was so confused because it didn’t smell like cat pee but her rug was soaked. Well, I went upstairs to check on her because I heard her door open and caught her mid-stream sleep peeing on her floor. She took her clothes off, changed herself and went back to bed. In the morning she could not believe she peed on her floor and had zero recollection of doing so. She sleepwalks, sleep talks, we have full-blown almost coherent conversations while she is sleeping and I have no idea she isn’t fully awake until some absurd detail slips in. We have arguments every day because if she sleeps all night without waking me up I promise her the world. She wakes up expecting a treat or screen time because she 'sleeped all the night' and I am like, no you did not; you were begging to be 'the chocolate one' at 2 a.m., whatever that means."

"My 4-year-old daughter and husband frequently have an argument about whose wife I am. She yells at him, 'No! Mommy's my wife!'"

"The most recurring one in our house right now is hand-washing. We argue that it is mandatory before meals ... and we don't lick our fingers ever. Their argument is they haven't been sick yet, and pinworms was one time and the doctor just gives medicine so what is the big deal."

"When she was 3 or 4, [my daughter] asked for some M&Ms, so I gave her six. She had a fit, saying that six wasn't enough. After some tense conversation, it turned out she actually wanted 10, not six. Not a crazy number, but obviously I couldn't back down once I started down the path of, 'you can have six or you can have none.' In hindsight I'm like, 'Dude, then-Dawn. Pick your battles.'"

"When he was about 4, my son ... was absolutely certain that Canada was a fictional place made up by his parents, like Narnia with maple syrup. We showed him maps and pictures. It didn’t persuade him. The argument continued over dinner, where we were overheard by the nice retired couple at the next table. They told my son that they were Canadians from Canada, and even showed him ID to prove it. He absolutely would not believe it. He was certain these total strangers were somehow in on our pro-Canada conspiracy. Honestly, I’m not sure he was completely convinced that it was a real place until we actually went there a few years later."

"When [my son] first started dressing himself he would occasionally put his clothes on backwards. I would tell him and he’d insist that they were on correctly. When I showed him the tag was in the front or the shirt pocket was in the back, he’d argue with me that’s where they’re supposed to be."

"A few years ago, the boys got cheap watches in their Easter basket. O. got blue, N. was obsessed with pink for a hot minute so he got pink. Fast forward several months later, O. insists the pink one is his (it’s not), but N. lets him wear it for the day. He wants to wear it again and N. says no, he wants to wear his watch. Huge. Epic. Meltdown. I show O. pictures of Easter where they are each wearing their own watch. Doesn’t satisfy him. He reasons it’s his because he wore it yesterday. Tears for days. It was so over the top, I took a video knowing it would be funny (one day). The video popped up in my Timehop just a little bit ago. Showed it to the boys. N. and I are laughing; O. starts arguing it was his watch all over again."

"My older one used to scream at me when she was, like, 2 because I couldn't pick her up and put her down at the same time."

"I always fondly remember the day I took my son for a walk in the stroller and he wanted a banana, so I peeled one halfway and gave it to him. Causing him to wail for the next 20 minutes because he wanted me to put the peel back on and I said — and showed him — that that wasn’t possible. Good times!"