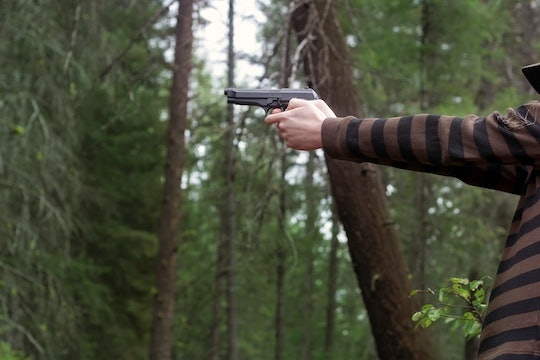 16 Kids Are Hospitalized Every Day For Gun Injuries

A new study to be presented at the 2017 Pediatric Academic Societies Meeting has provided some disturbing statistical insight into gun safety and children. By reviewing data that looked at why children are hospitalized in a given year in the United States, researchers from the Children's Hospital at Montefiore/Albert Einstein College of Medicine found that on average, 16 kids are hospitalized each day in the U.S. for firearm injuries.

While deaths from gun violence attributed to mass shootings are harrowing to consider, they aren't the only way that guns pose a risk to kids and young adults. According to research at the Children's Hospital of Philadelphia, 1 in 3 children in the U.S. lives in a home with an unsecured firearm. Even if parents do their due diligence to teach children about guns and how to be safe around them, it doesn't mean that accidents won't happen if parents aren't keeping the guns secured, in a safe that only they have keys to. When Alyssa H. Silver, MD, FAAP, attending physician and assistant professor of Pediatrics at the Albert Einstein College of Medicine and her team reviewed data from the Agency for Healthcare Research and Quality Healthcare Cost and Utilization Project Kids' Inpatient Database (KID) to assess the reasons that kids wind up in the hospital in the U.S. each year, they found that guns caused 5,800 children to be hospitalized in 2012.

The majority of these injuries by gun were unintentional, but in teens it was more likely to be the result of assault. They also found that 90 percent of the injured were male, and were more likely to be Black and live in poverty. The kids usually required around a week's stay in the hospital, costing on average $22,644. Many of those children living in low-income homes would have been on Medicaid, meaning the estimated economic burden to taxpayers of gun-related hospitalizations for kids in 2012 was around $130 million.

As Dr. Silver explained in the press release announcing her team's upcoming presentation:

The researchers hope that this data and their report "Pediatric Hospitalizations due to Firearm Injuries in the U.S. in 2012" (which they'll be presenting in full at this year's meeting) will help move the needle of legislation that cracks down on gun violence, and ramp up research and advocacy efforts to improve gun safety in the U.S.