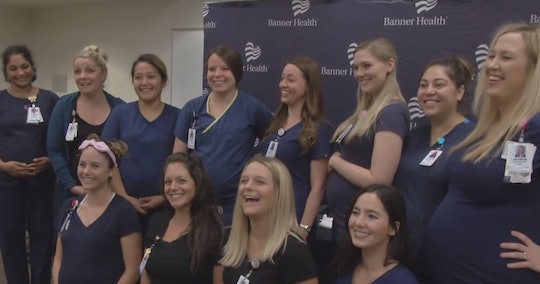 Something's In The Water, Because 16 Nurses From One Hospital Are All Pregnant RN

The rumor is that when women live together, their menstrual cycles will sync up. But who knew that meant that pregnancies might sync up, too! OK, that may not quite be what’s happening here, but there are 16 nurses from one hospital that are pregnant, all at the same time, so there must be something in the water, right?

Not only are the nurses from the same hospital, they’re all from the intensive care unit at Banner Desert Medical Center in Mesa, Arizona, according to USA Today. None of them realized that so many people were expecting until women kept being added to a particular Facebook group, USA Today reported. At a press conference, nurse Ashely Adkins commented that the hospital is also starting to wonder what’s in the water, according to local news station KPHO in Phoenix. Whatever it is, it’s sure bringing a lot of joy.

All of the babies are due between October and January, so the hospital has been planning for the coming nurse shortage for some time now, as KPHO reported. Each of the pregnant women will take 12 weeks of maternity leave and Heather Francis, director of nursing in the ICU told the news outlet that “we’ve been planning for this for months,” with a docket of fill-in nurses ready to go.

In a medical environment, there are always concerns about safety and that can only increase when dealing with the fragility of a new life. So the hospital is also working hard to ensure the expectant moms and their babies stay healthy, according to CBS News. “There are certain disease processes that we don’t want the nurses to be exposed to. Certain infections,” Francis told Channel 5. “Also, chemotherapy drugs can be very toxic to the fetus.”

During a press conference nurse Jolene Garrow thanked staff members who have taken over responsibilities that are too dangerous for the pregnant nurses, as the BBC reported. Examples include things like cancer treatments, and handling patients with contagious conditions like shingles.

The nurses weren’t alone in noticing the baby boom, patients have started to comment on the trends they were seeing as well, according to USA Today. It would seem a bit déjà vu-like to see pregnant women walk into a room shift after shift. As for the hospital, they’ve been supportive, as one nurse told CNN. During the press conference, as CNN reported, she told the story of asking a cafeteria worker if the salad bar could be more “pregnancy friendly,” to satisfy those cravings for things like pickles and olives. The next day those items showed up among the offerings, according to CNN. "You find out how supportive your co-workers are of you, and your management team," remarked one nurse to CBS News.

This isn’t the only baby boom in the medical world recently. In July, CBS News reported on a group of six nurses in Winston-Salem, North Carolina — all from the outpatient oncology clinic — who were pregnant together. The nurses there were celebrating the joy that the news brought to their patients who were dealing with life and death. “It brightens their day, you can see it,” nurse Nina Day said, according to CBS News, which also reported that one patient had even given the nurses a pretty amazing nickname: “the fabulous six-pack.”

The Mesa nurses are bucking the trend by delivering their babies late in the year. Summer is the most common season for births, according to the Centers for Disease Control and Prevention. Out of 3.8 million births in 2017, 352,000 of them took place in August, with July and September close behind. Mary Jane Minkin, MD, Clinical professor of Ob-Gyn at Yale School of Medicine told Yahoo Parenting it could all be related to the weather. “One thought is that people just have less sex in warmer months because it’s so hot out,” Minkin surmised, according to Yahoo Parenting.

But as much as people might try and plan, these baby booms are just proof that love has its own, sometimes very mysterious, plans.

More Like This
New Report Shows 80% Of Pregnancy-Related Deaths Are Preventable
What Does Amniotic Fluid Smell Like? A Nurse Explains
From Sexy To Spooky, These Pregnant Halloween Costumes Will Make An Impression
Are Boy Babies Usually Late? Signs Your Baby May Be Born Late