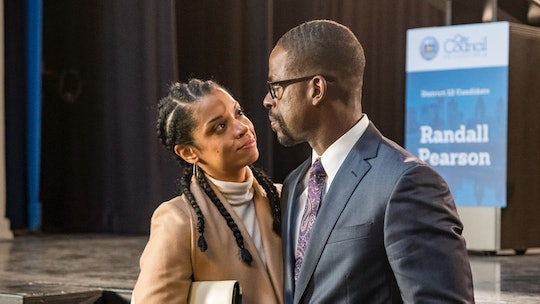 Few things in life are as reliable as Randall and Beth on This Is Us. Through understanding, compassion, and compromise, the aptly titled "R&B" remind viewers what the best relationships go through and how they mine their way out. But when Beth asked Randall to bow out of the city council race, Randall refused and ended up on the couch. Obviously, the internet freaked and there are some tweets about Randall and Beth that prove fans aren't ready for a split.

In the fall finale, it was finally revealed that not only did Jack's little bro, Nicky, survive the war and is alive, but that Rebecca is most likely the "her" in the hospital that set the internet on fire for literal months. But even more concerning — when "her" is referenced again in a flash-forward, it appears as though the future versions of Randall and Beth are no longer together when they're to go see "her." All of this comes on the heels of that first disagreement over whether Randall should even continue running in the election. If you know Randall at all, you know he's not going to just drop out, which circles back to Tuesday's episode, titled "The Last Seven Weeks," when the level of resentment had built up was shown in the weeks running up to election night.

There were many moments in the episode where you could feel an impending breakup on the horizon. No matter how loud you screamed at your TV, or how much you hoped it wouldn't happen, Randall lost himself in campaigning for the election (like he does with everything), and it had a real affect on his family. Of course things were on the up-and-up by the end of the show, but in the back of my mind, that flash-forward lingers. I'm not the only one who watched with clenched fists and bated breath. Twitter proves all This Is Us fans had some opinion on the power couple's deterioration. Some expressed it with prayer, others with a solid GIF, but the theme is clear — if Randall and Beth's marriage ends, so does life itself (inside the This Is Us universe where everything is dramatic).

Here are just some examples of what everyone is going through right now.

Some fans have been reduced to empty threats as seen below. Who'd actually stop watching the best show on the planet?*

*Opinions my own, but correct

After a lot of thought about what the future may bring, the following is me and every other Randall and Beth Stan.

I, too, have been reduced to begging, and have been since Jack's death (which I will never recover from). Do you hear me, This Is Us writers?

It's clear the world isn't ready for a major This Is Us split now, or maybe ever. If it's going to happen, do it to Kevin. That's to be expected.