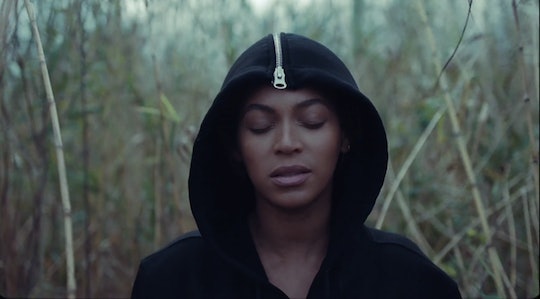 17 Best Beyonce 'Lemonade' Lines That Are Appropriate For Any Situation

I have a bit of a confession to make. Before watching Lemonade last night, I didn't really understand the Beyoncé frenzy. I liked her songs, sure, and I'd been a fan since her Destiny's Child days, but she was never one of the artists who I listed as a favorite. However, I watched Lemonade on HBO last night, and I am wholeheartedly converted because it was so good — and there were plenty of amazing lines from Beyoncé's Lemonade that are perfect for any situation, since that album was basically a book of quotable lyrics.

Lemonade was an artful piece of storytelling, and the full album tells an intricate, emotional story of betrayal, redemption, and power. However, each song is its microcosm of emotions, and plenty of lyrics can stand alone as poetic pieces. (Don't even get me started on Beyoncé's spoken word throughout the visual album, because that should stand alone as an entire work of art on its own.)

Beyoncé's always been the queen of fight songs. "Single Ladies" can probably be found on all break-up playlist ever created, and "Girls/Who Run The World" is up there as one of the best pump-up songs for the gym or that nerve-inducing job interview. Here's a few more lines to match your mood when you need them.

"I'm going to keep running, because a winner don't quit on themselves."

"Your mother is a woman. And women like her cannot be contained."

"Six inch heels, she walked in the club like nobody's business. Goddamn, she murdered everybody and I was her witness."

"She fights and she sweats those sleepless nights. But she don't mind, she loves the grind."

"I tried to make a home outta you. But doors lead to trapdoors. A stairway leads to nothing."

"You can taste the dishonesty, it’s on your breath."

"I don't know when love became elusive. What I know is no one I know has it."

"Why can't you see me? Everyone else can."

"Ashes to ashes... dust to side chicks."

"Middle fingers up, put them hands high. Wave it in his face, tell him, boy, bye."

"Looking at my watch, he shoulda been home. Today I regret the night I put that ring on."

"You know I give you life. If you try this shit again, you're gonna lose your wife."

"True love brought salvation back into me. With every tear came redemption, and my torturer became my remedy."

"Your heart is broken cause I walked away. Show me your scars and I won't walk away. And I know I promised that I couldn't stay, baby, every promise don't work out that way."

"Found the truth beneath your lies , and true love never has to hide."

I can already see a thousand new picture captions taking hold across Instagram. So thanks for the new phrases, Bey, which we'll all be able to repeat whenever going through the next ordeal — be it heartbreak or an extra long day. Is it too early to start counting down the days until the next Beyoncé surprise?