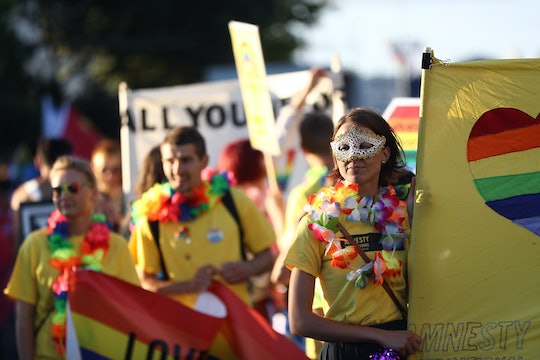 17 Pride Parade Outfits To Inspire Your Own Pride Looks

If you want to see some silly, outrageous, or downright beautiful outfits, then look no further than a Pride parade. As these Pride parade outfits demonstrate, this event brings out some of the most biting and beautiful ensembles around. Wherever you happen to fall on the Kinsey scale, you're sure to love these looks.

Although these parades and other Pride events are a tremendous amount of fun — as they should be — Pride also brings up some serious social and political issues that face the LGBTQ community today. For instance, some of the outfits reference marriage equality, spoof political leaders, or even pay homage to victims of LGBTQ violence. With this in mind, Pride events are not only a fun mixer for the community, but also a public way to address these pressing issues. Sometimes an outfit that's over-the-top and silly at first glance has a deeper social meaning. And in many ways, openly standing together with others at an LGBTQ event is a sort of political act in and of itself. "All of us who are openly gay are living and writing the history of our movement," said Senator Tammy Baldwin, the first openly gay U.S. Senator, according to the National Trust for Historic Preservation. Attending a Pride parade is one way to make history.

Plus, it's just healthy to go out and let loose from time to time. Seriously, if everyone got a chance to run around in fun costumes every once in a while, the world would probably be a kinder place. But until that time, there's Pride. Scroll on to see some of the best costumes that just might inspire your next look, or even make you think about LGBTQ issues in a whole new light.