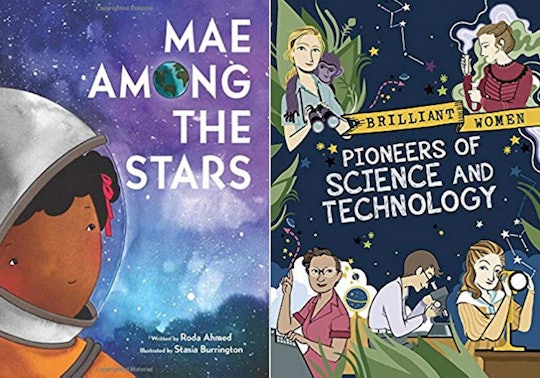 18 Children's Books About Female Scientists, Because STEM-inism Is The Future

I remember when I took my first microbiology class. It was a general education class, and I was dreading it. This was a class I was destined to hate — or at least that's what I was told. I had purchased the requisite expensive textbook, paid my lab dues, and sat far in the back. But later in that class, something magical happened. I fell in love with microbiology, even though I was told I'd hate it. I don't want that kind of stereotype for my daughter, so I compiled a list of children's books about female scientists that will hopefully inspire some future scientists of any gender.

Over the course of history, women have often been overlooked as great contributors of science. For one thing, in much of the past, women were not educated at the same rates or with the same rigor as men, so they were denied the opportunity to enrich themselves in a way that would encourage them to become scientists. For the women who would develop the skills and knowledge needed to become scientists, they were often relegated to assistant positions, which led to the men with whom they worked taking the credit. This is a phenomenon known as "The Matilda Effect," named for scholar Matilda Joslyn Gage who wrote about female scientists relegated to a footnote in history, while their male counterparts received all the accolades.

Thankfully, the world is now beginning to celebrate women in STEM, and these books elevate those brave women willing to shove their way into a field dominated by men that is frequently unfriendly to femmes.

I own almost all of these books, and the ones I didn't own already, I will as of noon on Wednesday. Thanks, Amazon Prime. Note: there is not much children's literature featuring female Asian scientists, but there are a wealth of Asian women in science who should have their own books.

More Like This
The 55 Best Chapter Books For Kids At Every Age
13 Kid-Friendly Ghost Stories For Littles Ones
18 Fun Mother & Son Halloween Costume Ideas
Where To Buy School Uniforms, From Jumpers To Dress Socks