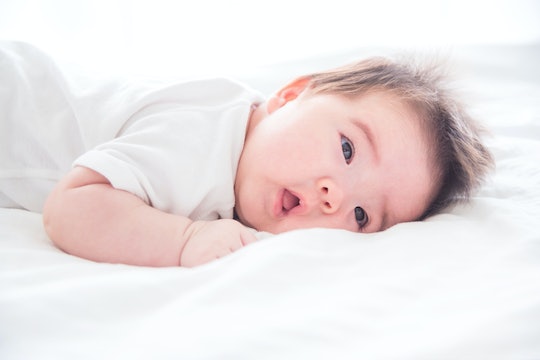 18 Weather-Related Baby Names, Because Kylie Did It Right

Since Kylie Jenner announced the name of her newborn daughter — Stormi Webster, as if you didn't already know — internet searches for weather-related baby names have spiked by approximately 8,000 percent. Okay, I made that statistic up, but it's probably not that far away from the truth: Every little move the Kardashian-Jenner family makes is crazy influential, for one thing; for another, Kylie is just keeping up with a nature-infused naming trend that was already well on its way to being the next big thing. If you're feeling this fad, you might be wondering: What are some other names inspired by meteorological events?

First, you might be interested to know that this "trend" is, in fact, nothing terribly new. (You might already know this if you grew up in the 70's and there was a kid named Rain in your class at school.) Back in 2016, an article in CityLab reported, Alaskan meteorologist Brian Brettschneider used birth data from the Social Security Administration to compile a chart ranking weather and climate baby names by popularity:

So Kylie clearly was far from the first mom to choose her daughter's name (though she did go with a non-traditional spelling). Still, there are plenty of weather-related baby names that didn't make this chart — including a few you probably haven't thought of yet, and some are super subtle, too.