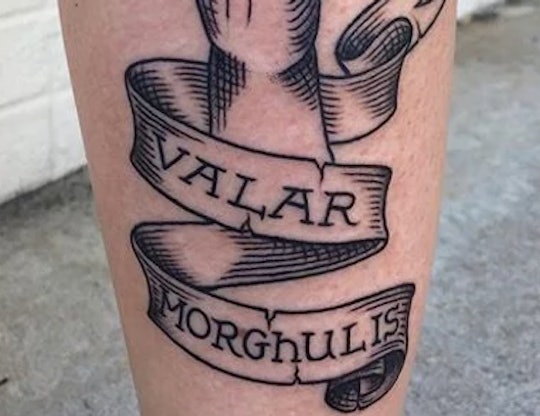 19 'Game Of Thrones' Tattoos To Unleash Your Inner Khaleesi

It's no secret that Game of Thrones has a wild amount of followers. Between the books and the HBO series, one of the two has probably drawn you in to its wicked world of foreign lands, power struggles, and dragons. With a cacophony of storylines, there's something to suit all tastes. And with epic language and dramatic scenes? It's no surprise that Game of Thrones tattoos are everywhere. The series is perfect inspiration for ink that inspires, reminds you of your ideals, or just plainly states how much of a badass you are.

If you're in the market for a Game of Thrones tattoo, chances are, you're pretty obsessed with the series. After all, a tattoo lasts forever. And if you're obsessed enough with the series that you're thinking about getting it inked on you, chances are you already know exactly what you want. But before you get that tat, check out the following ink masterpieces. Whether you consider yourself a Targaeryn, a Lannister, a Martell, or you're just a bastard, there's a Game of Thrones tattoo out there for you. And me? If I were to get a Game of Thrones-inspired tattoo, it would be this: But we are not men. But if that line doesn't liven you up, try one of these pieces of Game of Thrones-inspired ink.