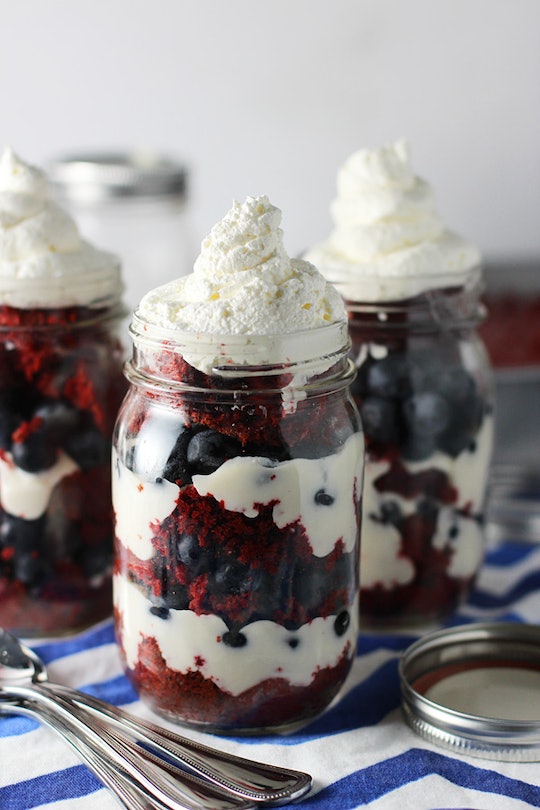 Courtesy of Cooking for Keeps

19 Red, White, & Blue Recipes For Your Fourth Of July Festivities

Every time I think of summer, the first thing that comes to mind is longer nights, colder drinks, and endless parties. By the time Fourth of July comes around, most people have enjoyed a lot of backyard barbecues, plenty of mixed drinks, and enough treats to last a lifetime. Instead of partaking in the regulars of the aforementioned, finding a few red, white, and blue recipes for Fourth of July this year would be a pretty cool way to switch things up a bit.

Sure, you feel really patriotic when you throw on your American flag t-shirts and deck the house out with red, white, and blue decor, but why does it have to stop there? This year, add a little pizazz to your party and go full out with the colors. And, it doesn't just have to be with your desserts. When I first thought of the idea of having red, white, and blue foods at a Fourth of July party, my mind only went to desserts because they're easy to color. However, after seeing all of the possibilities there are, I don't know why I didn't think of this sooner. Plenty of foods that we combine together create the three-color scheme that pour out from our nation's flag.

Just in case you're a little unsure like I initially was, these 19 recipes will help you see where to steer your menu for this year's festivities.