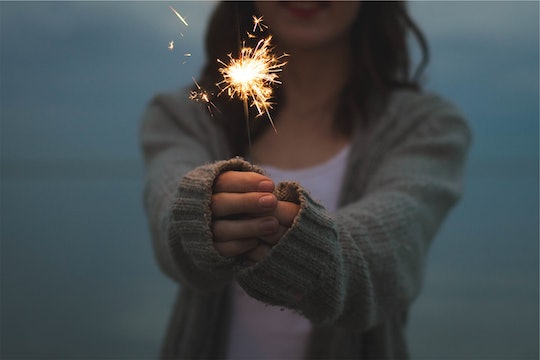 19 Thoughts You Have When You're Pregnant On New Year's Eve

Having been there twice, I can attest to the fact that being pregnant on New Year’s Eve is not all that fun. Of course, it’s more fun than, say, having the stomach flu, but perhaps I can only say that because I didn’t ever suffer from hyperemesis gravidarum — for some women, being pregnant is a lot like having the stomach flu. But even if that's not the case for you, being full of fetus as the calendar turns over is a unique experience, probably because there's almost no part of pregnancy that fits into our previously known notions of what New Year's Eve is all about.

No matter how much alcohol you normally consume, there’s a feeling of deprivation you often end up with when you absolutely can’t drink on a night when pretty much everyone is going to be having at least one drink. Sure, you can distract yourself by thinking that you have an important job to do, namely growing a human being, while your friends (or family) are in the midst of shenanigans, but like, you kinda want the shenanigans! Even the most important jobs deserve a night off from time to time, right? Even the people who are least prone to going out partying might find themselves a bit wistful on New Year's Eve, when their pregnancy prevents drinking, and their general exhaustion prevents running around town all night, booze or no booze.

Potential bitterness aside, New Years is a great time for reflection and for choosing the path you want to follow in the coming year. The fact that you’re bringing a new life into the world is a great reason to spend a little more time doing this, whether it’s your first or your fourth child. And let’s face it, not waking up on January 1 with a monstrous hangover? Eh, not the worst way to start a new year.

Or you could just spend the evening being bitter. I won’t judge. I’ve been there. Either way, here are some thoughts you'll have when you're pregnant on New Year's Eve.