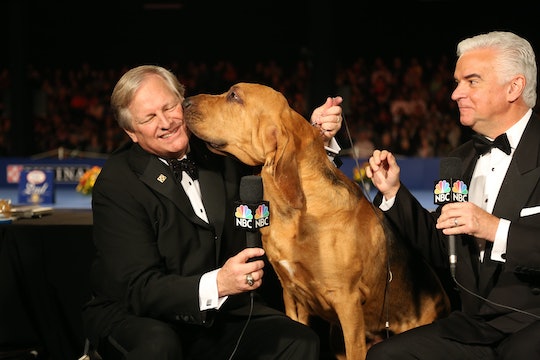 For some, Thanksgiving is a time to indulge in a succulent feast of festive delights. For others, it's a day to watch massive balloons float through New York City in the Macy's Thanksgiving Day Parade. But for animal lovers like me, Thanksgiving is the day we curl up in front of the television and watch the National Dog Show. Now in its 18th year, photos from previous years' National Dog Show make it clear this annual event has a long history of introducing families to adorable competitors of all sizes and breeds.

This year (much like previous years), more than 2,000 dogs are set to compete for titles like Best of Breed, First in Group, and Best in Show in the Kennel Club of Philadelphia's National Dog Show Presented By Purina. All of the dogs that compete are sanctioned by the American Kennel Club, which simply means they're purebred pups who have been officially recognized and registered with the American Kennel Club.

While this year's National Dog Show has technically already happened (no spoilers hers), NBC won't air it until noon on Thanksgiving Day. Until then, here are 20 photos of dogs strutting their stuff in previous years National Dog Show competitions: