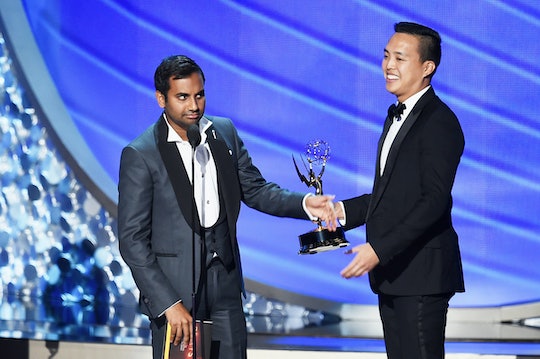 2016 Emmys Diversity Shows What TV Is Doing Right That The Rest Of Hollywood... Isn’t

In his opening monologue at the 2016 Emmys, Jimmy Kimmel didn't shy away from jokes on sensitive subjects, including diversity, which has been a major topic of conversation around every awards show since last year's Oscars and #OscarsSoWhite. “The Emmys are so diverse this year, the Oscars are now telling people we’re one of their closest friends. We’re not, by the way,” Kimmel said. Presenter Aziz Ansari made a similar jab, saying in a joke about Donald Trump that all Muslims and Hispanics at the awards would have to leave, adding, "Man, this would be so much easier at the Oscars." In fact, diversity at the 2016 Emmys shows what TV is doing really right. The rest of Hollywood would do well to take note.

In an interview with People, Latina actress and general badass America Fererra said, "there are so many people who want to be seen and represented, and TV has always needed to kind of speak to the masses. With the expansion of the many ways we watch television I'm proud to be an actor on TV when TV is getting it right ... We have a long way to go."

But the numbers show that Hollywood is moving in that direction. According to The Hollywood Reporter, 21 nominations at the 2016 Emmys were for non-white actors. Compare this to the 2016 Oscars in which exactly zero black actors and actresses were nominated for their work. In this, a "Golden Age of Television," television, the Emmys might be ready to replace films in terms of popular prestige. The Oscars are the fancier awards show, but the Emmys are a far better reflection of American viewership and tastes.

Though it has an impressively diverse lineup this year, the Emmys has historically been just as #SoWhite as the Oscars. According to Vanity Fair, Viola Davis made history in 2015 when she became the first woman of color to win Best Acstress in a Drama. In her acceptance speech she said, "You cannot win an Emmy for roles that are simply not there." More and more, the roles actually are there, and this is a very good sign for the future of television.

Some of the most highly anticipated awards were for shows prominently featuring people of color, including Empire, How To Get Away With Murder, Black-ish, Master of None, and The People Vs. O.J. Simpson, for which Sterling K. Brown and Courtney B. Vance both took home the award. For the first time, the Emmy awards are presenting a more accurate representation of people of color in society, and people of color are getting to see themselves in TV. "At no time in the past 70 years has our industry achieved the vibrancy, relevancy, consistent creative excellence, and diversity we are experiencing at this very moment," Television Academy chairman and CEO Bruce Rosenblum prior to the nominations' announcement. "This is far more than a second Golden Age of television. The fact is, no other entertainment medium surpasses the popularity, cultural impact, or global scale of television. "

But the Emmys are fully embracing more than just racial diversity. The trans community has perhaps never been more visible or more mainstream than in 2016, and that has also been duly represented in the Emmy nominations. Jeffrey Tambor, who plays a male-to-female transgender woman, won for Outstanding Actor in a Comedy Series, and dedicated his award to the trans community.

He begged the audience to "give trans talent a shot," and adding that he would be OK if he were, "the last cisgender man to play a female transgender on TV." Later in the evening, presenter and actress in the Emmy-winning series Orange is the New Black, Laverne Cox, repeated Tambor's plea for the industry to give trans actors a chance.

Television, in fact, appears to be doing exactly what Davis encouraged it to do at the last awards, and that is creating more roles for people of color. Empire, Black-ish, The People Vs. O.J. Simpson, Key and Peele, and Master of None are all shows nominated this year that directly and intentionally address race in America. They are helmed by people of color and cast racially diverse actors and actresses in leading roles. Their inclusion and recognition by the Television Academy sends the message that pop culture is at least heading in the right direction. Hopefully, this trend toward diversity will eventually make its way to the Oscars, which at this point seems bizarrely isolated from the diverse world of pop culture generally.

Furthermore, television, with its increased diversity, is on a steady uptick. For years now, people have been saying that the television today is doing better than the movies. Although it's difficult to say which medium is performing better financially, as they have different earning strategies, it is clear that television reaches a wider viewership. And according to a 2014 article published by Mic, productions with more diversity are quantifiably more profitable than those with less, as they receive higher ratings.

With this data in mind, it's basically impossible for the movies to continue their tried and true casting method of the-whiter-the-better and maintain their bottom line. TV, on the other hand, is on the right track. And this year's Emmys is proof positive.