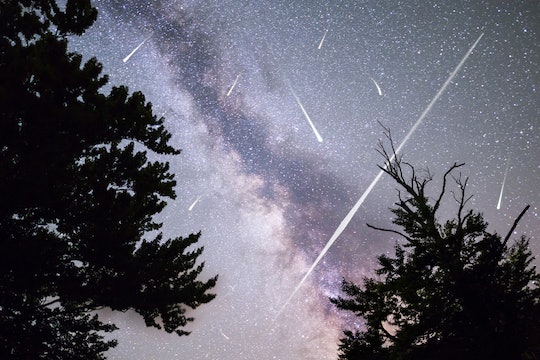 There Are TWO Meteor Showers This Month, So Buckle Down

Late summer is a perfect time to gaze at the sky for meteors, and two big showers are peaking near the end of this month. The July 2019 meteor showers to watch are the Southern delta Aquariids and the alpha Capricornids. Viewing this astral show is something you'll remember for a lifetime, and it's an amazing opportunity to make memories with your family.

First, here's some quick background on meteor showers and their unique lingo. Also known as a shooting star, meteors are small space objects that enter the earth's atmosphere at a high rate of speed and burn up, according to NASA. During certain times of the year, the Earth passes through a trail of debris left by a comet, and the number of meteors in the sky increases dramatically, as further explained in NASA. These are known as meteor showers. They are generally named after the constellation from which they appear to originate, according to StarDate, an educational resource from the University of Texas McDonald Observatory. For example, the Leonid meteor shower appears to come from the constellation Leo (at least to people watching from the Earth).

For the end of July 2019, there are two meteor showers on the way. The Southern delta Aquariids, which is best viewed from the Southern Tropics, will peak on July 29 to 30, according to the American Meteor Society (AMS). Best of all, the moon will barely be visible at this time, which means conditions are great for catching a glimpse of these falling stars. In addition, the alpha Capricornids, which is visible from both sides of the equator, will also peak on July 29 to 30, 2019, according to the AMS. Although the alpha Capricornids is not a particularly strong shower, it is known for producing a lot of fireballs, or extremely bright meteors, as further explained by the AMS. Watch the video below to see one of these super-bright Capricornid meteors that was filmed by NASA.

You don't have to visit an observatory in order to catch these meteor showers, however. First, you'll need to find a relatively dark area in order to see the meteors as well as possible. Check out this interactive light pollution map in order to find some nearby dark skies. (Just make sure it's also an area where you feel safe in the dark, too.) Once you're in a spot, break out a lawn chair and give your eyes about 15 minutes to adjust to the darkness, according to Sky & Telescope. Although not ideal, it's also possible to watch for meteors through closed car windows if that's more comfortable. (I've seen the Perseids this way many times). Next, gaze in the direction of the meteor shower. Check out In-The-Sky for personalized directions about where to look for the alpha Capricornids. Lastly, it's just a waiting game. It's best to avoid any light disruption, so keep phones and tablets off. Even if you don't see much, because sometimes clouds just ruin all the fun, it's still a cool way to spend an evening with your friends and family. And if you do happen to see some of the best meteor showers in July 2019, then those memories will stick with you forever.