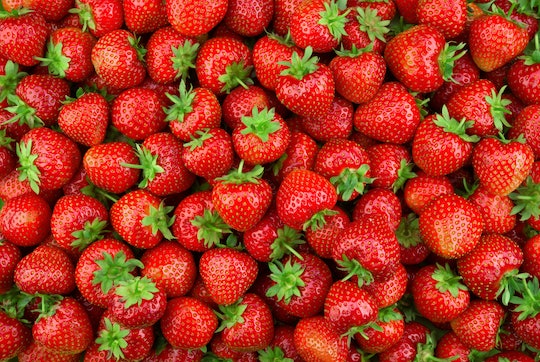 When it comes to eating healthfully, it's become common knowledge that we should be stocking up our plates with fruits and vegetables. But not all produce is made equally, it turns out. In fact, the Environmental Working Group's 2019 list of fruits and veggies with the most pesticides has been released and it includes many meal-time staples.

The EWG releases a list each year of something called the "Dirty Dozen," which is the top 12 fruits and vegetables most saturated with pesticides and other chemicals. It's important to note that, as Delish reported, to conduct the research, they do rinse and wash the fruit and vegetables the same way you would at home, so the number of chemicals still present would be similar to what you'd consume, as opposed to just what is on the produce prior to washing. The lesson? A simple rinse might not be enough.

This year's list isn't too different from last year's (or any year's, for that matter) as the top most chemically-saturated foods are usually some combination of strawberries, kale, and spinach. This is likely because not only are the produce exposed (as opposed to being inside a peel, like a banana) but as in the case of strawberries, being so sweet, they often require a lot of pesticides to ensure that insects don't eat all of the berry before it arrives at the grocery store.

Overall, the EWG reported that the Department of Agriculture has found that there are over 225 chemicals and pesticides typically found on our produce. Just how much is contaminated? Well, the estimate is 70 percent. According to the EWG's report, here's the top 12 most pesticide-latent foods on the market:

However, it's not all doom and gloom, as the group also releases a "Clean Fifteen" list each year, including foods that are generally safe to eat, and have very rare instances of being heavily saturated with pesticides. You'll notice that many of them have some kind of shell, skin or layer to peel, which does help in keeping them fresh and safe to consume.

Of course, if you aren't familiar with information regarding the importance of organic foods, you might be wondering: What's the big deal? If these chemicals are already found on our foods, are they really that harmful? Well, yes.

At the end of last year, JAMA released research from the American Medical Association on the risks and health benefits of an organic diet. In a study of over 69,000 participants, researchers concluded that those who consumed the highest frequency of organic foods had 25 percent fewer cancers than individuals who did not.

Another Harvard study last year also revealed that there is a link between individuals who have a diet that is heavily saturated in foods with pesticide residues and fertility problems, according to JAMA.

Of course, what's most startling about the reports is that it is often some of the foods that are healthiest for us that can also pose some of the greatest dangers when it comes to pesticide and chemical consumption. This means that you might want to consider purchasing items like strawberries from the organic section, while you can rest assured that bananas are pretty much a safe bet either way.

It might not go without saying that sometimes, organic groceries are not fiscally reasonable for some people. However, there are resources like WIC available, and you can see here whether or not you'd be eligible.

The choices that you make for your family regarding food and nutrition are personal, and subjective, for everyone. What matters most is that everyone is aware of the latest research, and can then made a decision for themselves.