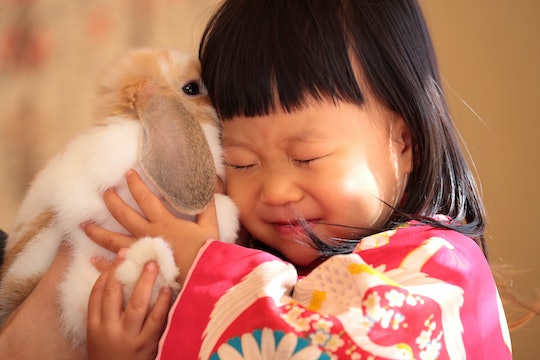 21 Kids On What They're Actually Thankful For This Thanksgiving

You brought your kid into this world, but Disney+ has Beauty and the Beast, so it's really a toss-up what your child will say they're thankful for this Thanksgiving. In my experience, both as a former preschool teacher and as a parent, kids' answers to the question are often pretty hilarious.

Here's the thing: kids don't always get the concept of gratitude... because they're ingrates. I'm not saying that as a negative — it's a completely neutral statement! — children are genetically engineered to be almost exclusively preoccupied with their own self-interest for the first chunk of years. So when I asked some of my friends' kids to share their own expressions of gratitude and thankfulness, I was ready for a mixture of nonsense, misunderstanding, and hilarity based largely on the fact that my own children have mostly answered "I don't know" or "video games" whenever they've been asked to conjure up some thanks. These wee ones did not disappoint. And yet mixed in with the weird and confusing, I also found real sweetness. Here's what they had to say...

[Oreo is apparently her aunt's cat. Colby could be a pet, could be a snack.]

"My Mommy, Bimmy (Grandma), Georgie (our tortoise), and my sister."

[As they say in law enforcement, tortoises before othoises]

"That my dad has been healthy this year."

[Per Lucy's mom, this answer is almost certainly related to the fact that she was watching How The Grinch Stole Christmas when she was asked the question. Toddlers, man...]

"I'm thankful for family and friends."

[On the one hand, this is precious. On the other hand, a child thankful for nature as winter begins is clearly not a child who is made to shovel their driveway when it snows and I'm legitimately jealous.]

""I'm thankful for my new room. I decorated it with a new rug and cool pictures and paintings in frames and a new lamp, so it's, like, house snob fancy."

[You have to love William's appreciation for the finer things.]

I'm thankful for my bunny, Bun, because she's so soft. —Gioia, 5

[Confession: any time a kid tells me they're going to tell me an f-word I get nervous and nine times out of 10 that worry is misplaced.]

"I'm thankful for my bunny, Bun, because she's so soft."

"My parents and people's caring."

[Maddox's mom thinks he doesn't quite get the concept of being thankful. I think he's the socialist hero America needs right now.]

"Having an awesome school and my grandpa, since he was in the army and loved me before he died."

"That we will be all together."

"I’m thankful for my sister being nice to me."

[Depending on your tone this either reads incredibly sweet or ominous as hell...]

"I’m thankful for food and water, and family and friends, and clothes and stuff that we need, and my sister."

"All of my parents, Santa, my whole family, toys and mermaid dogs."

[So clearly I asked her to tell me more about mermaid dogs, to which she responded "Ya know! Half mermaid, half dogs," and it's like "Oh yeah, duh. Obviously."]

"I'll tell you on Thanksgiving."