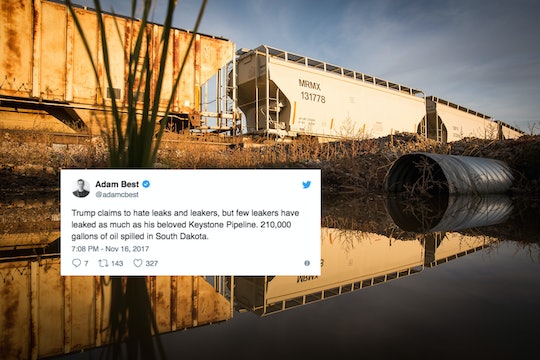 210,000 Gallons Of Oil Spilled From The Keystone Pipeline, & Twitter Is Absolutely Furious

Only days before officials in Nebraska are set to announce whether or not construction of the controversial Keystone XL Pipeline will move ahead, the already-existing Keystone Pipeline has had its biggest leak to date in South Dakota. The Keystone Pipeline has leaked 210,000 gallons of oil into South Dakota, according to CNN, making it the third pipeline spill in the state this year. The fact that the spill occurred in the first place isn't entirely surprising — in 2010, the first year the pipeline was active, there were 35 leaks, according to Inside Climate News, and in April 2016 the pipeline was shut down after a 17,000-gallon spill, according to CBS News. But given the long-standing concerns over the Keystone XL — the fourth phase in TransCanada's Keystone pipeline project — this latest, and largest, spill has people seriously angry.

After the leak was first detected Thursday, TransCanada officials once again shut down the pipeline, and the cause is reported to still be under investigation. South Dakota Department of Environment and Natural Resources spokesperson Brian Walsh told CNN that there were no initial reports of the spill affecting water systems or wildlife, but that oil from the below-ground leak has indeed surfaced above ground, and that it will still take "a few days" before any groundwater contamination can be properly verified.

The Keystone Pipeline is far from being the only oil pipeline in the country — according to Pipeline 101, there is approximately 72,000 miles of crude oil lines in the United States — but the concern over leaks, and the overall environmental impact of oil pipelines, ultimately led President Barack Obama to block construction of the Keystone XL in 2015. During his presidential campaign though, President Donald Trump praised the Keystone XL project, claiming that the project would "put a lot of workers, a lot of steelworkers back to work," according to BBC News. So within days of taking office, the president signed an executive order that would allow both the Keystone XL pipeline, as well as Energy Transfer Partners' similarly-controversial Dakota Access pipeline (which led to a grueling ten-month protest at the Standing Rock reservation in North Dakota), to move ahead, according to CNBC.

Unsurprisingly, the reaction on social media following the news of the leak has been scathing, with many people particularly angry at Trump's dismissal that the oil pipelines wouldn't have an environmental impact:

Others argued that the latest Keystone spill just proved exactly why the Keystone XL extension was a terrible idea:

In a Twitter thread, freelance writer Marissa Lingen pointed out that the fact that the pipeline was "shut down safely" means absolutely nothing in terms of the impact the spill will actually have in South Dakota:

And, of course, many others also noted that the clean up effort was going to be extensive to say the least:

Currently, the Keystone Pipeline transports nearly 23 million gallons of oil each day from Canada to refineries in Illinois and Oklahoma, passing through North and South Dakota, Nebraska, Kansas, and Missouri as it does so. But the volume of oil, coupled with the fact that the pipeline specifically transports oil sand crude oil, not conventional crude oil, makes the spill even more concerning.

According to Quartz, oil sands crude is much thicker and stickier, and must be diluted in order to flow through the pipeline. As a result, chemicals like benzene (a known carcinogen) are often added — something that becomes especially worrisome when that oil spills above ground. And it's harder to clean up when it does spill: Quartz noted that a 900,000-gallon spill in Michigan's Kalamazoo River in 2010 cost oil company Enbridge more than $1 billion to clean up, and that the effort took years to actually complete.

In other words, it's not at all surprising that the spill has caused outrage. Yet given Trump's history of support for the project — and his history of not making environmental protection a priority — it also wouldn't be surprising if the Keystone spill ultimately ended up as yet one more blip on the radar.

Until officials in Nebraska issue their decision on the Keystone XL, its fate is still up in the air. But the main Keystone Pipeline will almost certainly be back up and running in time, regardless of Americans' many objections.