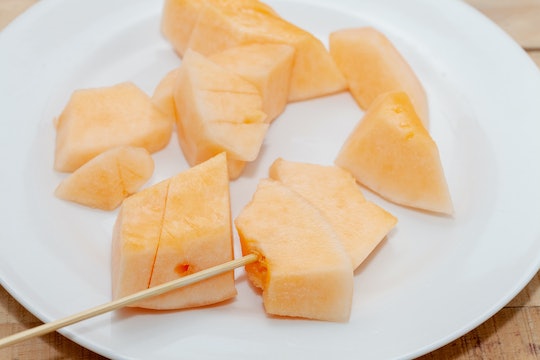 23 States Are Now Affected By The Pre-Cut Melon Recall, So Check Your UPC Codes

The arrival of summer weather and backyard BBQs might leave you with a hankering for some watermelon (the quintessential summer fruit, if there ever was one), but if, like me, you also happen to be a hot-mess mom with a deep appreciation for the convenience of pre-cut fruit and veg, you might just want to give it a miss for now. Because while it might finally be considered safe to eat romaine lettuce again after a widespread E. coli scare earlier this year, 23 states have now recalled melon due to salmonella contamination fears, according to CNN — and it's specifically pre-cut melon that carries the risk.

At this point, the recall appears to only affect products from Caito Foods, LLC that include "fresh cut watermelon, honeydew melon, cantaloupe and fresh-cut mixed-fruit boxes," according to People, and originally stems from concerns about salmonella exposure at its facility in Indianapolis, Indiana. But since the products have been distributed to grocery stores throughout most of the country — including Walmart, Kroger, Jay C, Walgreens, Payless, Sprouts Farmers Market, Costco, Trader Joe's, and Whole Foods/Amazon — consumers are being advised to double-check their melon products to be sure that they're safe for consumption (a full list of recalled melon products, along with UPC codes and best buy dates can be found on the FDA website). Responding to the recall, Caito Foods issued the following statement:

Caito Foods takes food safety seriously and is committed to following strict procedures regarding product handling and the cleaning and maintenance of our facilities to deliver the high quality products our customers have come to expect for more than 50 years. As soon as we became aware of the situation, and out of an abundance of caution, we voluntarily recalled all pre-cut melon from our distribution lines and stores, and instructed our partners to do the same. We continue to cooperate fully with the regulatory agencies on this matter, including their request to help determine the farm where the fruit was grown.

So far, the Centers for Disease Control has reported that 60 people in five states in the Midwest have become ill, 31 of which led to hospitalization (thankfully, none of the cases have been fatal). General symptoms of salmonella poisoning — aka salmonellosis — include diarrhea, fever, and abdominal cramps, usually appearing between 12 to 72 hours after infection, according to the CDC, and the infection will usually last between four to seven days. Most people will recover without treatment (some don't even experience any symptoms whatsoever), but the Mayo Clinic notes that complications, such as dehydration from severe diarrhea, can require prompt medical attention, and infants and young children, older adults, transplant recipients, pregnant women, and people with weakened immune systems are at particular risk.

Each year, salmonella bacteria is thought to cause around 1.2 million illnesses, 23,000 hospitalizations, and 450 deaths in the United States, according to the CDC, with contaminated food being the primary cause. So while it's important to be aware of food recalls, such as the current one involving melon, it's also wise to prioritize prevention. According to the CDC, tips for preventing salmonellosis include: cooking animal products like poultry, ground beef, and eggs thoroughly, and avoiding consuming raw eggs or milk; avoiding cross-contamination of foods while cooking or preparing meals; and regular hand-washing, especially after touching raw meat or poultry, coming into contact with any fecal matter, or handling reptiles, birds, or baby chicks.

Food recalls are one of those things that can make you start to feel wary of eating, well, pretty much anything, and it feels especially concerning when foods you thought were safe, healthy choices turn out to be contaminated with potentially-deadly bacteria. But while the actual likelihood of becoming seriously ill from cantaloupe or honeydew is still low, it's a good idea to be aware when there may be a problem, and to exercise appropriate caution just in case.