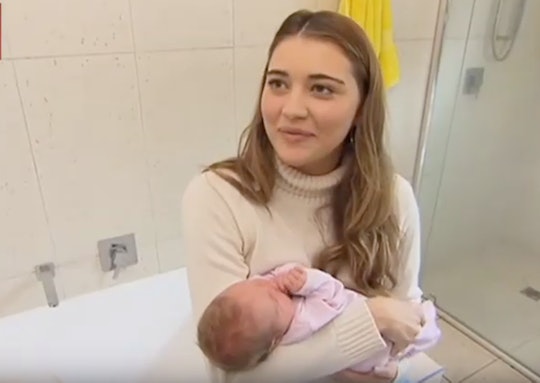 Though it may seem impossible to some that a woman could go an entire pregnancy without knowing there was a baby growing inside her, that's exactly what happened with a new mom in Australia. The 23-year-old woman had no idea she was pregnant until she recently gave birth in her bathroom.

On Oct. 29, Erin Langmaid started feeling unwell and went to her bathroom. And just 10 minutes later, she delivered a 7 lbs, 7 oz. baby girl at 37 weeks gestation, People reported. "I heard a scream and I ran in there," her boyfriend, Daniel Carty, told 7News. "And then I saw the little one and I thought, hang on there's two." The newborn wasn't breathing at first, so Carty called for emergency help. With the guidance of a dispatcher over the phone, the new father was able to get the baby breathing and the new parents named their baby girl Isla May.

What this new mom experienced is a phenomenon referred to as a cryptic or stealth pregnancy, according to Healthline. And it happens more frequently than you might think. In fact, one in 475 women don't know they're expecting until 20 weeks into their pregnancy, and 1 in 2,500 don't find out — like Langmaid — until they're actually in labor, according to a 2011 British study published in the Royal Society of Medicine.

Langmaid had no reason to believe she was pregnant. "I wasn't showing obviously because I fit into everything. It's just really bizarre," she told 7NEWS, adding that she had also been getting contraceptive injections.

Despite being unaware and completely unprepared to have a baby, it seems Langmaid and Carty are smitten with baby Isla — and are taking their new life as a family of three in stride. "We want to share with you our new little family member. Isla May was brought into the world on Tuesday night, she lived in mummy’s tummy for 9 months without letting us know," Daniel wrote on Instagram on Nov. 1. "After an extremely tough few days both mother and daughter are perfectly well and ready to go home. The support of our family and friends is something that we will never be able to thank them enough for."

Thankfully, everything turned out OK in Langmaid's cryptic birth story. Based on the updates she and Daniel have posted on Instagram so far, it seems they have a strong support system in place, which will undoubtedly come in handy as they embark on this new and unexpected chapter of their lives.