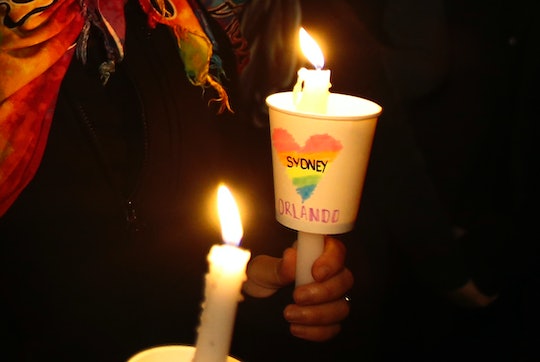 Left with little to do but come together to try to make sense of what would drive a man into a nightclub on Saturday night to open fire on innocent people, mourners across the world are holding events to remember the victims from the Pulse nightclub, their friends, family, and loved ones. Here are 29 vigils for Orlando shooting victims where mourners can come together to remember those who were lost.

Vigils are being held not just across the U.S., but across the entire world. From Paris to Toronto and back to Orlando, people are gathering to find some comfort in being surrounded by friends and neighbors and are taking the time to remind one another that love will always win over hate.

Many of the vigils are being coordinated by members of the LGBTQ community, which was supposed to be in the midst of Pride month celebrations. Instead of reveling in how far the LGBTQ community has come in the fight for civil rights, we are all having to face the harsh reality of how much work there is yet to be done.

But besides shattering the LGBTQ community, this crime is a stark reminder for millions of Americans, and mothers, particularly, who have lost those they love to gun violence. Moms from Mom's Demand Action, a coordinated gun safety advocacy effort on behalf of mothers all over the country, and Everytown for Gun Safety are showing up in force to mourn the loss in the Pulse nightclub and demand reforms.

Here is a list of upcoming events being compiled by #WeAreOrlando if you'd like to find a vigil for Orlando shooting victims or add an event listing of your own. For those who live in Orlando, police are asking for mourners to postpone events that could draw already stretched police resources away from the scene at Pulse nightclub.

For the wounded victims from the Pulse nightclub, these vigils will hopefully send the message that they are not alone and that the world prays for their recovery.

Take a look at these vigils being held all over the world in honor and remembrance of the Orlando shooting victims to serve as a reminder of the lives that were so tragically taken.

Candlelight vigil for Orlando victims at Robinson Plaza, at the bottom of Commerical St.

Candlelight vigil for those lost in Orlando.

Vigil in honor of Pulse Orlando

No matter where you are, attending a vigil for the Orlando victims will help to show that the LGBT community is not alone, and a crime against them is also a crime against all who love and support them.