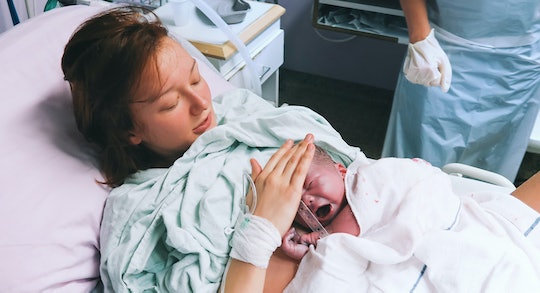 Science News reported that according to a study published in January 2011 in Acta Paediatrica that followed 28 babies in the first hour and ten minutes of their lives, babies meet the same milestones. It's fascinating to think that all babies share the same basic instincts to, essentially, stay alive. And not only are they meeting these same milestones, but they are essentially meeting them at the exact same time.

So no matter where the baby is born (home or at the hospital, outdoors or indoors), what their gender, or where in the world (in the United States or in Asia, in the north half of the equator or the south), they are most likely meeting these milestones, to the beat of nature's clock.

The first thing babies do within the first seconds of being born is let out a big old cry. Sounds obvious, but there's actually a very specific reason why they do this. In their first hour on earth, babies make a cry to kick-start their lungs, reported Parents. This is probably one of the most anticipated moments for any parent in the delivery room — and a highlight of any birthing scene in a movie — to hear the baby's first cry soon after they are delivered.

Shortly thereafter, at minute 2, your baby will hold perfectly still. "The authors speculate that this silent, still break might have evolved to keep babies hidden from predators," reported Science News. However, those predators must have had really short attention spans, because babies are on to the next thing within a few minutes.

Within the first few minutes of life outside the womb, babies make an effort at finding food, scooting themselves toward their mom's breast, "relying heavily on a sense of smell to navigate," explained Science News. This baby-led initiation of breastfeeding is becoming increasingly recognized by mothers and birthing professionals. Belly Belly explained, "When babies who have not been exposed to medications are placed skin to skin with their mothers and left undisturbed, they will instinctually crawl to their mother’s breast and attach themselves to the nipple."

All babies have the ability to find their food source, according to Breastcrawl.org: "Every newborn, when placed on the mother's abdomen, soon after birth, has the ability to find its mother's breast all on its own and to decide when to take the first breastfeed." Unfortunately, hospital births often impede this natural journey to initiate breastfeeding. Healthy Mom & Baby wrote, "Sadly, expert healthcare assessments often get in the way of nature’s preferred method of starting breastfeeding, despite recommendations otherwise from UNICEF and the American Academy of Pediatrics (AAP)." The key to having a baby get to the breast on her own is to allow her to be left alone in skin-to-skin contact with the mom for at least the first hour after her birth.

Of course there may be certain circumstances that prompt a medical team to evaluate the baby immediately upon birth. If this is something you are concerned about, have a conversation with your OB-GYN and the team in your delivery room.

While the baby is only going to have a quick colostrum nursing session, the initial start at breastfeeding of their own volition during skin-to-skin is typically more successful than if the baby is whisked away to be weighed and checked and have medical procedures done before getting a chance to bond with its mother. Pediatrician Christina Smillie told Breastfeeding USA, "The mom should hold her baby, skin to skin — baby in a diaper only, mom with no shirt or bra — and just enjoy the baby. She should hold the baby upright, midline between her breasts, just cuddling the baby with no thought about breastfeeding. There's no hurry; we’re on baby time here." She went on to explain that if the baby doesn't immediately seem interested in breastfeeding, that's OK too, and she likely will wake up to the idea on her own time.

After an initial hour of alertness, babies then conk out following all that amazing action in their first moments on earth!

More Like This
When Does A Baby Recognize Their Father? A Pediatrician Explains
Tips to Beat Jet Lag, For You & Your Kids
5 Superstitions About Babies Born On Valentine’s Day
How To Celebrate Baby’s First Valentine’s Day, From Gifts To ’Fits
What Parents Are Talking About — Delivered Straight To Your Inbox