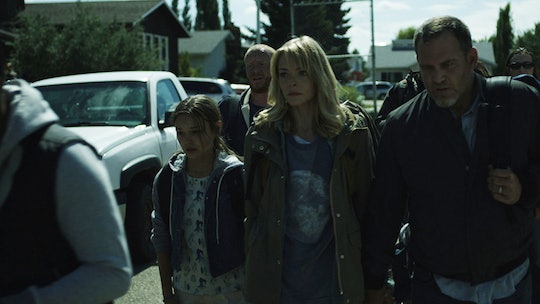 Have Questions About 'Black Summer'? These 3 Fan Theories Could Provide Clarity

The latest zombie series to hit Netflix is Black Summer, a series starring Jaime King that premiered on April 11. Now that fans have had some time to binge the show, Black Summer theories are beginning to circulate on the internet. And if you have some lingering questions about the first season, these three Black Summer theories could give you some clarity.

Social media is a catch-22 situation for TV. On one hand, you risk running into spoilers at every turn, but on the flip side, you can easily discuss your favorite fan theories with other viewers. Black Summer —the prequel to Z Nation — is no exception to this phenomenon. A Reddit sub for the series already exists, for instance, and fans have been trading theories with one another since the premiere.

As is expected, some fans have some lingering questions about Season 1 of Black Summer, especially where it concerns seemingly minor plot points. From why the character of Sun (played by Christine Lee) speaks Korean to confusion about the scene featuring a black market, there are a few plot points worth theorizing over. And if you need a little help piecing the puzzle together, here are three Black Summer theories to get the ball rolling.

Why Does Sun Speak Korean?

Considering Black Summer is an American show, some people are curious about why Sun mainly speaks Korean. A long monologue from Sun kicked off the discussion, with one person on Reddit complaining: "She’s monologuing right now and I’m sure she knows no one can understand her."

Although Sun doesn't speak English, she's seemingly understands the language and she's an intelligent strategist. And her lack of English tells an important story about the immigrant experience, Redditors theorize. Translation: The language choice wasn't made on a whim.

"It's actually quite easy for a non-english speaking immigrant to get by here if they have a solid support system of other people from their native land around them. I think that's part of the point of Sun," one person wrote. "She is one of those types of immigrants who has completely lost that support system, and is now having to figure out how to communicate with people who don't understand her."

Another person argued that her language plays adds an air of complexity to the series.

"We don't know why she's here, because it doesn't matter," someone said. "Maybe her family brought her on vacation. Maybe she was smuggled over to work at a rub and tug. Maybe she's a refugee from North Korea. None of that is relevant post zombie apocalypse. I love the lack of boring backstories."

Someone else had a different theory, however. They said: "Netflix is gaining steam in Korea right now. That is definitely the reason."

A Black Market Months After An Apocalypse?

If you watched Season 1, you might have wondered why a black market of sorts is possible in a zombie apocalypse. It doesn't seem to track, to put it mildly.

"They are only a month removed from civilization. There is no way in hell something like this would have developed so quickly," someone vented on Reddit. "The entire population would be too scared to even attempt a black market. Everyone who wasn't desperately trying to escape would be buried in their houses shaking in terror. This episode was bullsh*t."

A possible answer to this plot point? One person suggested: "I know what you mean. Manny knew about it before though so my theory is it already existed and he had been there or worked there before. If it existed they'd just be carrying on what they were doing."

Hmm. That seems to make sense.

One compelling theory centers around that Rose's (played by Jaime King) daughter isn't real. The idea rests on the final episode of Season 1, in which Rose supposedly sees her daughter again after a period of separation. Although one might assume that the two were reunited in the finale, but others believe Rose's child is no longer alive.

"Let's just say it's widely debatable that Rose's kid is there or just a figment of her imagination," someone argued. "Rose has already hallucinated seeing her kid several times prior to that."

Another fan chimed in: "Before they even cut to black I thought, 'She's not really there'. I think it was a hallucination for sure."

One person penned: "She’s not, and if she is it’s probably a zombie version of her. The stadium was too clean. I bet they were actually murdering people to control the chance of further outbreak."

Interesting stuff, right? Here's to hoping these questions will be fully answered if Black Summer is renewed for Season 2.