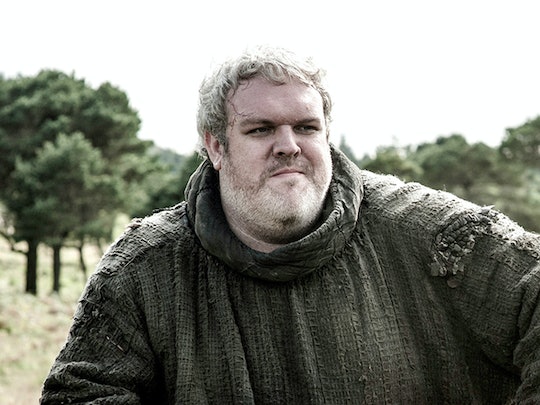 If there's a more beloved character than Hodor in Game of Thrones, I've yet to find him. After Hodor-ing his way into your heart throughout the seasons with just one word (seriously, he only ever says one word), it's time to pay your respects to Hodor by creating a Hodor Halloween costume for kids that pays tribute to the most gentle giant you ever knew.

The Hodor costume is surprisingly versatile. Yes, he's a man of few words, but he did have some variety throughout the series —even if you can't quite remember it. Spanning through the ages of Hodor, these DIY costumes are sure to give any Game of Thrones enthusiast a giggle and might just make the true Hodor-enthusiasts tear up a little at your adorable adoration for your favorite (or your kid's favorite) Game of Thrones character. Not to mention, it's an incredibly easy costume to pull off. So easy that you might just consider dressing the whole family up as Hodor. Imagine that. A whole group of Hodors roaming the neighborhood. What a tribute that would be.

You don't meet Young Hodor until fairly late in the Game of Thrones series, but when you do, it's worth the wait. You can recreate the era with a grey tunic ($25), black leggings ($13), and a black vest ($25). For accessories, all you need are a wooden sword ($23) and plush stuffed horse ($20) to represent the horse that Hodor takes care of for Lyanna. Everyone will agree, you've got the cutest Hodor in town.

Hodor's costume doesn't change much throughout the seasons of Game of Thrones, but you can pretty much always count on him to be wearing a monochromatic, cozy looking number. If you've got a set of brown sheets ($25) lying around, they'd be the perfect base for this all brown Hodor costume. Just drape them over a pair of brown leggings ($25), brown boots ($25), and add a brown scarf ($30) around their neck to get the full effect.

The piece de resistance of this costume is this tiny fairy door ($4) that your child can carry around with them, holding it up while yelling "Hodor!" to anyone that will listen.

Though the basis for this costume is fairly similar compared to the rest — a grey turtleneck poncho ($32), a pair of grey sweatpants ($47), and white lipstick ($24) to fake Hodor's stubble on your child's face — the addition of brown suspenders ($14) and brown belt ($10) make this version of Hodor genius. Use them to strap a box of Raisin Bran ($4) to your child's chest so they can carry Bran around all night. Get it?