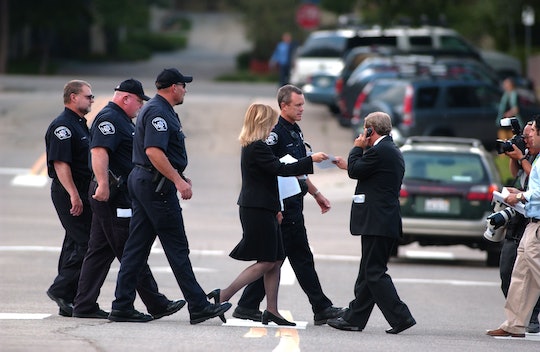 3 JonBenet Ramsey Theories That Police Have Investigated But Never Proved

When it comes to a case as highly publicized and hotly debated at the murder of six year old JonBenét Ramsey, there are always going to be opinions and theories about what happened. The explosion of the public's interest not long after the crime occurred certainly helped it remain a topic of debate even as the years passed by without an answer as to who committed the murder. However, salacious and unfounded potentialities don't actually help matters; all they do is turn a tragedy into a circus. These three JonBenét Ramsey theories are leads the police were actually following, even if none of them panned out.

Some people subscribe to the theory that JonBenet's parents, John and Patsy Ramsey, are responsible for her death. However, Mary Lacy, the DA in Boulder, Colorado at the time, never felt there was enough evidence to indict them and believed that an unknown intruder was responsible for what happened. In 2008, the Ramseys were formally cleared of any suspicion when DNA found on JonBenét's body did not match anyone in the Ramsey family or any of the other suspects being considered. No one was ever convicted for the murder, and the case remains open and unsolved.

The DNA found on the body is an important piece of evidence in the case, and has so far ruled out every suspect. There were very small amounts of DNA found underneath JonBenét's fingernails, on the waistband of her leggings, and on the underwear she was wearing. The DNA on the leggings was thought to come from a cough or a sneeze, and there was a drop of blood found on the underwear. The sample was so small that it could not be tested until technology improved years later, and the only answer it provided was that it came from an unknown man.

Despite the fact that they were never convicted and were cleared based on DNA evidence, JonBenét's parents faced a lot of public scrutiny following the crime. Several investigators found there were no signs of a break in (the snow outside the house was undisturbed, as were the cobwebs over the window the intruder allegedly entered through). Other key pieces of evidence in the crime – the paper the ransom note was written on and the paintbrush handle in the garrote that was used to strangle JonBenét – were proven to have come from the home.

According to the Denver Post, in 1999, a grand jury voted to indict both John and Patsy for permitting "a child to be unreasonably placed in a situation which posed a threat of injury to the child's life or health which resulted in the death of JonBenét Ramsey" and also alleged that they "did ... render assistance to a person, with intent to hinder, delay and prevent the discovery, detention, apprehension, prosecution, conviction and punishment of such person for the commission of a crime, knowing the person being assisted has committed and was suspected of the crime of murder in the first degree and child abuse resulting in death." However, DA Lacy chose not to file charges based on what she felt was a lack of evidence. A few years later, the DNA evidence cleared the Ramseys.

Detective Jim Kolar was an investigator on the case who ended up writing a book about his theories; he was a firm believer that an unknown intruder had not killed JonBenét, though DA Lacy dismissed his theories as conjecture.

Romper reached out to L. Lin Wood, the Ramseys' attorney, for comment regarding the unproven allegation that the Ramseys were involved in JonBenét's death. Wood responded in an email:

A former schoolteacher named John Mark Karr actually confessed to killing JonBenét in 2006, but after he was taken in, it became clear that details of his confession did not match up with the actual crime. He claimed to have drugged and raped JonBenét, but no drugs were found in her system and no semen was found in her body. He also initially said he picked JonBenét up from school that day before killing her, which was impossible because it was Christmas and she was at a party with her family earlier that day. Karr also had an alibi, as he was living with his wife in Alabama at the time and according to her, he did not leave at any point that holiday season.

Oliva was suspected of involvement in JonBenét's murder but never arrested for it, thus is innocent until proven guilty. He was recently arrested for possession of child pornography. He was in Boulder at the time of the murder, and he has a stated obsession with JonBenét, but it does not seem like there was enough evidence to connect him to the murder. However, a spokeswoman for Boulder city, Sarah Huntley, told the Denver Post they did not feel "comfortable ruling anybody out as a suspect, or ruling anybody in as a suspect, in the Ramsey case."

The fact remains that none of the people considered suspects in the death of JonBenét Ramsey have ever been convicted of her murder. An unknown assailant isn't a satisfactory answer to the mystery, but as of right now it's the only official answer there is.