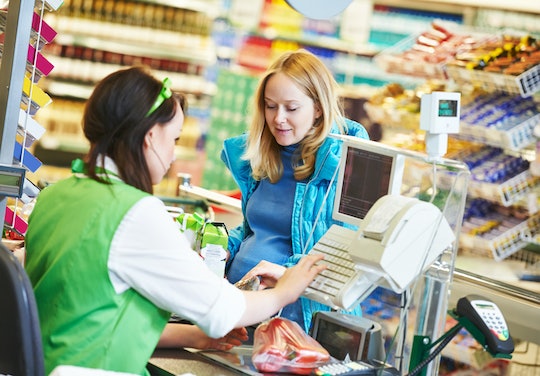 When I worked in retail, I dreaded nothing more than logging in hours during the holidays. I had to wake up at an ungodly hour just to wait in the cold for a bus that was perpetually late. I stood on my feet during long shifts that had me running around wild. And closing down the store at the end of the night was a terrible process. Unfortunately, amidst all that chaos, many businesses use the holiday season to take advantage of their employees, which is why I compiled a list of three laws about working during the holidays that every working mom should know.

From overtime pay to mandatory shifts, federal and state legislation affords private and public employees certain protections when it comes to working during the holiday season — and on actual holidays themselves. On the flip side, though, the laws don't apply evenly across industries, sectors, and types of workforce, nor do they address every issue that arises in the workplace. For example, if you're paid by the hour — known as non-exempt — then your boss is not required to pay you on the holidays, according to Ask A Manager. It would also be legal for your boss to require you to use your PTO to cover the lost wages.

Under the Fair Labor Standards Act (FLSA), employers are not required to pay you extra for working on a nationally-recognized holiday, no matter if you're an hourly or salaried employee. Holidays are considered to be regular work days, so any extra pay or paid time-off would be determined by your boss and included in your benefits package, according to The Balance. However, if you are a salary employee — known as an exempt employee — your employer cannot legally doc your pay if you do not work on a holiday. You must be paid your full weekly salary under federal law, The Balance reports.

That doesn't mean non-exempt employees are left out in the lurch. The FLSA mandates that hourly workers receive overtime pay — usually equal to time-and-a-half — if they log more than 40 hours in a workweek. So if you are a retail or hospitality worker who's scheduled for Christmas, and you reach 48 hours including that holiday shift, then your paycheck must reflect overtime. This law is especially pertinent to working moms, who are among the millions of women who hold two-thirds of the country's low-wage jobs, according to the National Women's Law Center. FLSA's overtime rule, however, doesn't apply to all types of businesses, so where you may not be eligible under federal law, your state law may have you covered.

Time Off For Religious Observance

Under Title VII of the Civil Rights Act of 1964, businesses with 15 or more employees must provide reasonable accommodations for their workers' sincerely-held religious beliefs, unless it causes "undue hardship." In other words, if you're Jewish and observe Hanukkah, your boss must honor your time-off request for the holiday, according to U.S. News & World Report. Some state laws even strengthen the religious exemptions protections afforded under Title VII, such as in California, which applies the rule to companies with just five workers, U.S. News reported. The only catch is that you must explain your beliefs and "prove" that you're part of an "established, organized religion," Sachi Barreiro, a legal editor at law resource website NOLO, told US News.

I'll say it again: Working during the holiday season is a drag, especially if you work in the service industry. And it could be made worse if you feel your employer is taking advantage of you. So make sure you have these laws in your back pocket just in case.