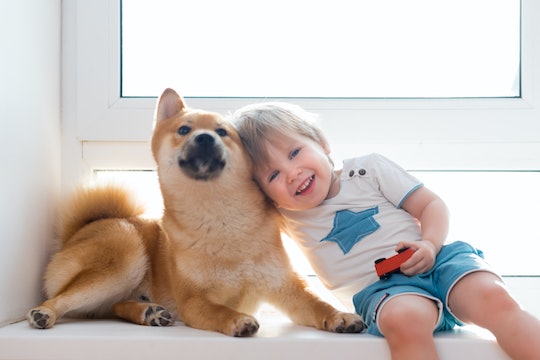 3 Most Independent Dog Breeds That Can Keep Themselves Entertained

Welcoming a new dog into your life is a huge commitment. If you're a busy family that's constantly on the go, you might want to make sure that any pup you bring home is OK with hanging out solo at times. Choosing an independent dog breed could increase the odds that your furry friend will be able to cope when you're not around.

Colleen Demling-Riley, a canine behaviorist at Pawtopia, tells Romper via email that independent dogs are good at keeping themselves entertained. "An independent dog tends to value his own opinion as much as the pet parent’s and is as happy being on his own as playing with his family," she says." That can sometimes make them seem a bit aloof and unattached to their owners, but Demling-Riley says that's not usually the case. "This aloofness shouldn’t be confused with a lack of bonding," she says. "Independent pups bond strongly with their family and need love and guidance in order to feel secure."

Demling-Riley also warns, however, that every dog is different. "The breed or breed mix of a dog is a very small part of the personality of a specific dog," she says, so even those known for a certain trait might not live up to the label. Generally speaking, though, these three breeds should have an independent streak.

More Like This
Yes, It’s Possible To Get Pregnant If You Have An IUD
The 4 Main Parenting Styles & Which Is Best For Kids
When It’s Safe To Bring Your Newborn To A Restaurant, According To A Pediatrician
Gemini, 2023 Will Be A Year Of Slow & Steady Changes