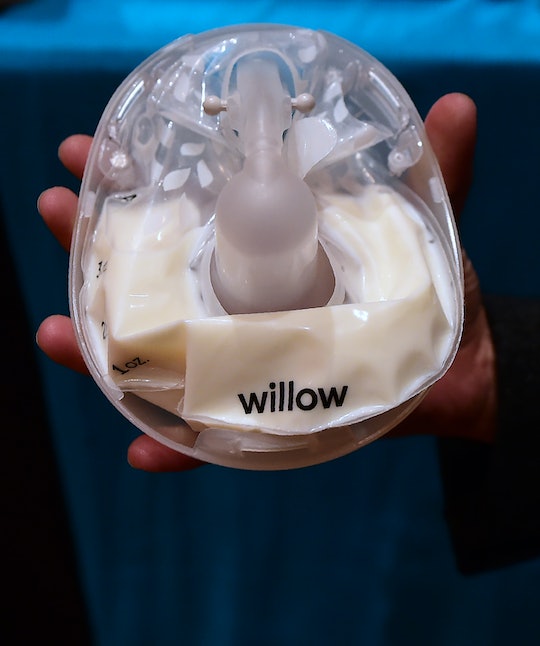 At the latest Consumer Electronics Show (CES), the world met Willow, described as an all-in-one, "smart" breast pump. The mobile, hands-free pump is being lauded for being discreet and seemingly manageable for moms who choose to pump, and the internet has been buzzing about the product since the product debuted at the event. But there are clearly other breast pump options out there, and the $429 price tag on Willow is giving some consumers pause. What are some other smart pumps to be on the lookout for, to compare to the much-discussed new gadget and it's companion app?

As discussed on sites like engadget.com, smart pumps like Willow aren't total game-changers, but many of the features, like the fact that it "relieves moms from the hassle of having to hold up a device or be chained to a power outlet while pumping," and the design that allows the device to be tucked inside a bra, do appeal to parents who know they'll be on-the-go when they need to pump. But of course, breast pumps are not a super new invention, and there are other options out there that are similar to Willow at cheaper price points — though they don't have all the features of the new kid on the block.

The Lansinoh Smartpump connects to a smartphone via Bluetooth using the company's own, free Lansinoh Baby app for tracking and reminders, similar to the app the team behind Willow is offering with their new product. Lansinoh website advertises the pump as, "the ONLY pumps with three pumping styles and eight adjustable suction levels, allowing you to select the setting that works best for you."

A closed-system design reduces the number of parts cleaned and prevents bacteria and mold growth. And its compact size and quiet motor make it convenient for the mom on-the-go.

So it has an app, and is reported to be compact and quiet, like Willow. However, it isn't hands-free, and the app only seems to record output from pumping sessions. Still, it appears similar to Willow, without a price tag that may be out of reach for many. It seems to be available for a range of $169-199 from Target, buybuyBABY, and other retailers.

The Sonata is a double-electric breast pump, and also connects to an app, MyMedela. It's described on their website as a "breast milk feeding resource for an instant connection to your personalized pumping dashboard."

The app tracks pumping sessions and baby's growth, and additionally is supposed to include, "evidence based lactation information and personalized content." As much as it keeps your pumping session info up-to-date, the team behind the Sonata also seems to want to keep you updated on information regarding breast-feeding, which is an interesting, informative feature.

But it also doesn't appear to be completely hands-free, and isn't designed to be tucked away the way the Willow is. In addition, their website is selling the product for $399.99, so price could still be a problem for some shoppers.

Freemie offers a breast pump that is advertised as being hands-free, the Freedom pump, and a different model that's main selling point seems to be how discreet it is, the Equality pump. They use concealable Freemie Collection Cups, that can be placed underneath clothes for more inconspicuous pumping. So the hands-free convenience of the Willow is matched by one option right away, and they both seem to facilitate a more private pumping experience.

Both these products do still use collecting tubes/breast funnels, so they're still not quite as compact and unobtrusive as the Willow team claims their product is. They also do not seem to link up with a compatible app, so if that's the "smart" part of smart breast pumps that you're really interested in, these particular products are not the way to go.

The Freemie Equality Deluxe Set is advertised on their website for $69.95, and the Freemie Freedom Deluxe Set goes for $195.95.

So there are definitely options on the breast pump market that are comparable to Willow, depending on what you're looking for as a buyer. It comes down to what features are most important to you, and what you're willing to pay for the product. And, as always, what you're most comfortable with as a breastfeeding parent.