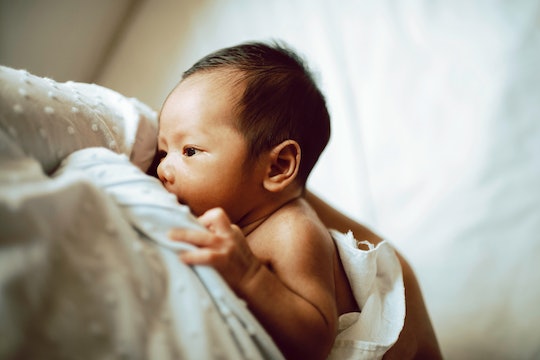 Breastfeeding is often presented as the most natural thing in the world, but most nursing moms will tell you it's not always that simple. Many women struggle with nursing, turning to alternative methods for aid as these photos of women using nipple shields show.

In case you're unfamiliar, nipple shields essentially extend the nipple, often serving as a temporary fix for babies who have trouble latching. They also help women with inverted or flat nipples, as it creates an easier shape for the baby to put his or her mouth on. They're a common recommendation from midwives or nurses, and they totally change breastfeeding for a lot of women. But there can be stigmas around them, especially because they aren't discussed in public that often. And they can impact your milk supply in some cases, so they aren't always recommended. But that doesn't mean they aren't right for some women.

As long as your baby is getting the nutrients they need, there's no right or wrong way to feed them. Nipple shields can be an incredibly important tool for women who struggle with breastfeeding, which is why normalizing them is so important. These photos highlight show how integral they are to nursing for some women.