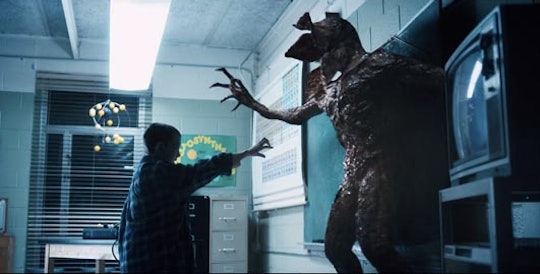 3 'Stranger Things' Demogorgon Costumes For Fans Of All Ages

Netflix's Stranger Things is the show that just keeps gaining momentum, and it's sure to be the inspiration for a number of Halloween costumes this year. Although there are certain to be dozens of Elevens and Barbs taking the streets for trick-or-treating, the real monster from the show would also make for a fantastic costume. It may be tricky, however, to find a replica of it in costume shops, because the show is still pretty new. Fortunately, there are plenty of ways you can put together a Stranger Things Demogorgon costume for Halloween, whether your intended costumer is a baby, kid, or grown adult.

Sure, Stranger Things is full of throwbacks and camp, but the Demogorgon made for a legitimately scary monster. From its swampy lair in the Upside Down, it hunted the unsuspecting citizens of Hawkins, Indiana with supernatural ferocity. Part of what makes the Demogorgon so unsettling is its otherworldliness; it moves like an animal, but it has the characteristics of a plant as well. Its bulbous face is sure to be the stuff of nightmares for kids (and more than a few adults) long after the series has wrapped. It is one well-designed monster.

So how can you or your kids approximate this costume if you don't have access to a professional Hollywood monster maker? Well, it may take a little imagination, but you can come up with a decent Demogorgon costume with a little help from your favorite costume shop (and perhaps your own closet). Whether you want to go for a scary or silly version of it, these Demogorgon looks are perfect for the strangest night of the year.