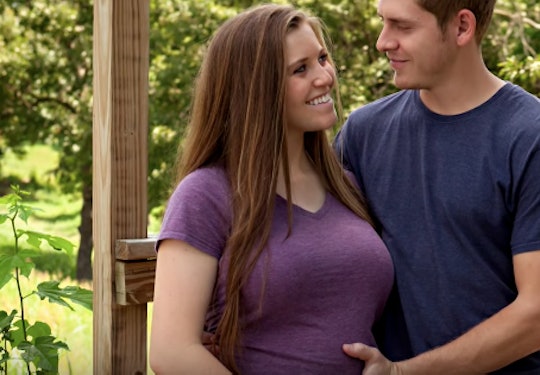 3 Theories That Joy-Anna Duggar Is Having Twins, According To Fans

Joy-Anna Duggar is set to give birth on Feb. 22, and many Counting On viewers are still throwing around unfounded theories about her pregnancy — like the theory that Joy-Anna Duggar is having twins, according to the Inquisitr. Those who've been following her and husband Austin Forsyth's pregnancy journey may be well aware of all the fan speculation and, most recently, their joint Instagram post from Valentine's Day has followers convinced that she'll be popping out not just one but two babies this week.

Fans of the reality TV star are looking forward to hearing an announcement from her in the coming days but, until then, they are leaving their two cents about the size of her baby bump (does no one understand that that's offensive to a lot of women?) on all her photos.

"Such a big bump," one fan wrote. "Must be more than one." Another said, "I think it is a boy and a girl." And another simply commented, "Twins!" Others wrote, "Oh my goodness @austinandjoyforsyth joy looks like she is [having] twins with that baby bump," and, "Is it a girl? I also was thinking twins your bump is huge!"

This isn't the first time fans have speculated that Joy-Anna is going to have twins. There've been at least three other theories throughout her pregnancy that Duggar family fanatics have circulated about the baby (or babies) in Joy-Anna's belly.

Let's take a gander at some of the most popular ones, shall we?

1. People Point To The Fact That Michelle Duggar Had Twins

Helm of the Duggar household Michelle gave birth to two sets of twins, Jana and John-David, 23, and Jedidiah and Jeremiah, 14. As a twin myself, I've always been told that it'll be my kids who have twins — not me. But, according to The New York Times, the notion that twins always skip a generation is just a myth. So it is quite possible, then, that twins run in the Duggar family and Joy-Anna could have them, too.

2. Joy-Anna's Christmas Bump Was "Big," According To Fans

Back in December, the couple shared a photo on their joint Instagram account from their Christmas date. Joy-Anna captioned the photo, "Christmas date night!" and added a heart emoji. It was an innocent photo of a couple sharing their first Christmas together as husband and wife, but it led to a whole lot of speculation, according to Cafe Mom.

3. Some Fans Think Joy-Anna Has Looked Pretty Far Along For Awhile

Followers of the Duggar family have been saying for a while now that Joy-Anna probably got pregnant before she married Forsyth back in May, thanks to photos of her bump that make her look further along than her due date would say she is, according to The Hollywood Gossip. Many are assuming that she got pregnant out of wedlock, especially since she allegedly admitted to breaking courtship rules prior to their engagement, the Hollywood Gossip reported. Of course, holding hands or side-hugging can't get one pregnant, so speculators assume that things must have gone a few steps further than that.

In November, a photo surfaced of Joy-Anna in a photo from a Texas wedding. "Does she look five months pregnant?" the caption asked. "It's got to be triplets."

She could have just looked suspiciously far along for far too long because she's pregnant with twins (yes, or triplets...). That's always a possibility, and many fans are giving her the benefit of the doubt that that's indeed the case.

But it's important to remember that no two bumps look the same and all women carry their pregnancies in their own uniquely beautiful ways. Let's just let Joy-Anna and Austin enjoy the last few days of pregnancy with however many buns in the oven — all these theories will be solved in just a few short days anyway.