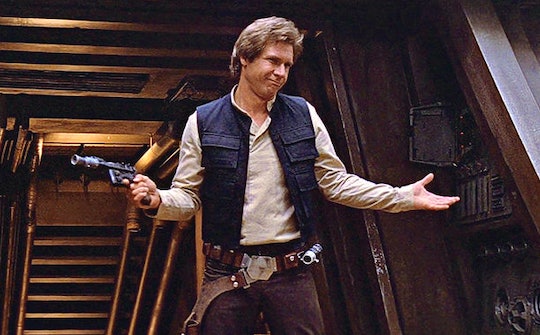 3 Things Donald Trump Could Learn From Han Solo, Since He's Such A Fan

Donald Trump may love Harrison Ford and his portrayal of Han Solo, but the feeling isn’t mutual. After hearing that the Republican party nominee was a fan of his work, particularly in Air Force One and the Star Wars franchise. “My favorite [on-screen President] was Harrison Ford on the plane,” Trump told the New York Times in a recent interview. “I love Harrison Ford — and not just because he rents my properties. He stood up for America.” During the interview, Trump also expressed his love for the latest Star Wars movie, The Force Awakens.

But Ford — a lifelong Democrat and close friend of former President Bill Clinton — isn’t as much of a fan. So when Ford appeared on an Australian morning show, Studio 10, on Wednesday, he decided to respond in a Ford-like fashion:

It's a movie, Donald. It was a movie. It's not like this in real life. But how would you know?

In the same interview, Ford pretended to misunderstand Trump's current political ambitions, joking: "President? Oh, I thought it was resident. So, he's not only going to live there, he's going to run the show? That's … not so much, no. I don't think so."

But this got us thinking: If Trump is such a fan of Ford, his portrayal of President James Marshall, and Han Solo maybe he could learn a thing or two from these characters. And, since The Force Awakens premieres in a week, we decided to see what Han Solo could teach Trump about life, liberty, and leadership.

Ego Only Gets You So Far

Han Solo is arrogant, reckless, sarcastic, and full of himself. He thinks he knows everything, and he believes he can do anything — and aside from Chewie, he is hell bent on doing these things alone. (Did I mention he also thinks he is “God’s gift to the world?”)

Han Solo: Han Solo. Captain of the Millennium Falcon. Chewie here tells me you're lookin' for passage to the Alderaan system?

Ben Obi-Wan Kenobi: Yes indeed, if it's a fast ship.

Ben Obi-Wan Kenobi: Should I have?

Han Solo: It's the ship that made the Kessel Run in less than twelve parsecs.

But his delusions of grandeur only get him so far. It isn’t until Han opens up — until Han lets Luke and Leia in, lets love in, and asks for help (well, he indirectly asks for help when his friends save him from Jabba the Hut) — that Han Solo goes from a selfish smuggler to a cocky-yet-committed powerhouse. So unless you want to end up frozen in carbonite, Mr. Trump, maybe it is time you checked your ego and listened (really listened) to what the American people are saying. You cannot rule this country alone.

Don’t Judge A Ship By Its Exterior, A Smuggler By His Occupation, A Jedi By His Religion, Or A Creature By The Color Of Their Skin

Oh, Mr. Trump, if Han could only talk to you! I can hardly imagine what he would say, but I am certain tolerance would top his list. You see, the Star Wars universe is diverse, and its success (or failure) revolves around acceptance and understanding. Han’s best friends are a Wookie and a Jedi, the force is a power of both good and evil, and Han himself is a criminal, and an immigrant. Does that mean if Han landed in America you would deport him? Do you believe Jedi’s should carry ID cards? Do you see how absurd this sounds?

Let’s not mention the Millennium Falcon is one janky-ass ship:

Luke Skywalker: [on first seeing the Millennium Falcon] What a piece of junk!

Han Solo: She'll make point five past lightspeed. She may not look like much, but she's got it where it counts, kid. I've made a lot of special modifications myself.

So maybe, just maybe, we shouldn’t judge a book by its cover, a ship by its exterior, or people by the color of their skin, their country of origin, or the religion they ascribe to. (Besides, when the Imperial army focused its attention on destroying a single race/religion, it found itself destroyed...by Ewoks.)

Not Every War Can Be Won With Weapons

I know what you are thinking: Wait, lightsabers...blasters...interstellar lasers? Isn’t that the crux of Star Wars? Well, yes. The galaxy is at war. Good is battling evil, and “sci-fi action violence” is the backdrop for much of the Star Wars series (thanks MPAA for that very specific designator) but the good guys do not use violence gratuitously. They resort to violence only when necessary, and they seek alternative solutions whenever possible. They also put their faith in the force, they use cunning and patience and even a bit intel to overcome their “aggressors,” and they follow the Jedi code of ethics. You know the one:

So Trump, even though you love Ford as President James Marshall, perhaps you should be listening more closely to another one of Ford’s infamous characters. Han has a lot to teach you, if you choose to listen.