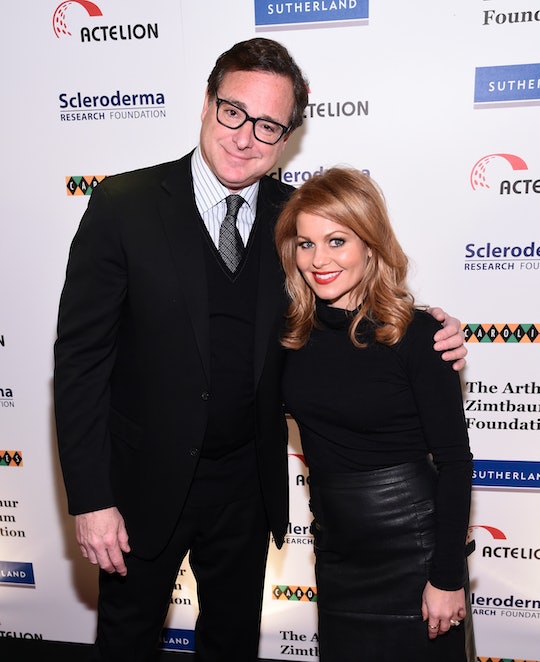 If you were hoping for lots of Danny, Uncle Jesse, and Uncle Joey action in the Netflix series Fuller House, prepare yourself. They basically aren't there. The spinoff actually does what a spinoff is meant to do — be about some of the supporting characters from the original series. So although the men make an appearance, the show is about D.J., Stephanie, and Kimmy Gibbler kicking the men out and showing them that they know how to do the right thing when it comes to family. Basically, D.J. is the new Danny Tanner, Stephanie is Uncle Jesse, and Kimmy is Joey. Come to think of it, it's a good thing the Olsen twins didn't make it back for the series: Fuller House would be nothing without Andrea Barber, who plays Gibbler, in a lead role and something tells me Ashley and Mary-Kate wouldn't have been comfortable being the comedic relief in mismatched prints.

D.J.'s storyline matches Danny's almost perfectly, setting the show up to be just enough like the original to satisfy Full House fans but also new enough to stand on its own.

The entire reason Full House exists is because Danny's wife Pam was killed by a drunk driver. Likewise, D.J. returns to the family home because her husband died working as a firefighter.

Both Danny and D.J. were left to care for three kids of similar ages — Jackson is D.J., Max is Stephanie, and Tommy is Michelle. Three boys, three girls, both sets raised by a parent of the opposite gender.

They Stock That Fridge

This detail is the kind of thing you forgot you knew about Full House. There is always fried chicken in their refrigerator. Or on the counter for Uncle Jesse and Steve to randomly consume. It's actually pretty genius — both as an Easter egg and a good meal planning tip for feeding your brood. Besides the fried chicken though, the Tanner house fridge is always full. Full enough for everyone to always be eating something, lavish family breakfasts, and feed Steve. How do they do it?

They Have Trouble Dating

Well, trouble isn't really the best word. Danny Tanner went on dates and even had a girlfriend in later seasons. D.J. has two very active suitors on Fuller House. But for both of them, family and their ex's come first. Danny breaks up with Vicky because he can't move his family to New York City to be with her. D.J. turns down Steve and Matt to focus on herself and her kids. The timing is just never right for either of them.

D.J. takes after her dad in lots of other ways. If Danny was always compulsively cleaning, D.J. is a tad neurotic. They're also both pushovers — neither of them can effectively ground or punish a kid without eventually giving in. The comparisons between the two, like the other girls' comparisons to the other men, are a cute way to tie the original to the new version. Now, if only we could figure out who makes the fried chicken.