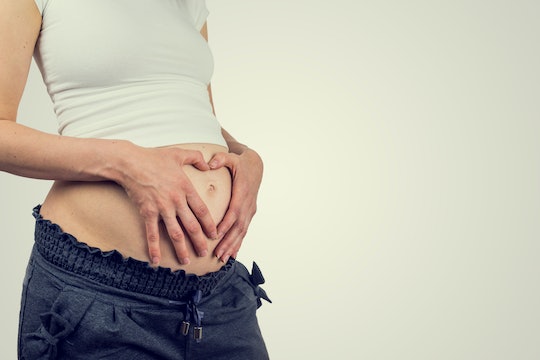 While running for president, Donald Trump made no secret of the fact that he was running an expressly anti-abortion campaign, and while his administration has since attempted to make a number of policy changes aimed at restricting women's reproductive rights, the recently released draft of the Department of Health and Human Services's new strategic plan seems to be taking that fight further than ever before. For the first time, the HHS strategic plan expressly stats it will "[serve] and [protect] Americans at every stage of life, beginning at conception," and it's a huge departure from the generally accepted views of the medical community. These 3 ways science proves life doesn't begin at conception show that, although the Trump administration's anti-abortion stance may end up having an effect on health care funding and decision-making, it isn't one that's actually supported by evidence.

According to ThinkProgress, the HHS strategic plan is created to provide a blueprint for the agency's goals, as well as the goals of the offices it oversees. Although it's not surprising that Trump's plan differs from that of President Barack Obama's, it turns out that it's even more explicit in its anti-abortion views than the last Republican plan, under President George W. Bush. While both Bush and Trump emphasized the value of "faith-based partnerships" in their respective HHS plans (Vox noted that Trump's plan used the word "faith" 46 times), Bush stopped short at mentioning anything about the definition of when a human life begins.

According to Vox, a number of HHS staffers in prominent positions have backgrounds in anti-abortion or anti-choice organizations (HHS assistant secretary of public affairs Charmaine Yoest was formerly the president of Americans United for Life, for example, while Teresa Manning, now in charge of overseeing family planning, formerly working as a policy and legal analyst for the Family Research Council and the National Right to Life Committee, according to Newsweek). It's not particularly surprising then, to see the HHS take such a conservative position — but as science has noted, there's much more to it than arguments over morality and religious ideology.

1. A Fertilized Egg Can Turn Into A Baby — But That Doesn't Mean It Will

Regardless of your viewpoint regarding abortion, it does make some sense that anti-abortion advocates consider conception as the beginning of life. Once an egg is fertilized, it has the chance to eventually grow into a baby, who theoretically could be born and thus, would be considered a person with all the associated rights. But as medical experts have pointed out, fertilization shouldn't be considered the beginning of life, because, well, biology is much more complicated and flawed than our ideological opinions might like it to be.

Protecting the rights of fertilized eggs might seem like a good way to ensure those eggs grow into babies, but in 2011, Sean Tipton, Chief Advocacy, Policy and Development Officer for the American Society for Reproductive Medicine told CNN that the idea doesn't even sort of align with the medical reality. Tipton said,

There are lots of fertilized eggs that never become human beings. Humans are notoriously inefficient producers, and we believe most [fertilized eggs] actually go out with a woman's menstrual flow.

2. Many Complications Can (And Often Do) Occur Between Fertilization & Birth

Then there's the fact that, while we may prefer to think of pregnancy as a beautiful time in which a human being grows and flourishes without issue, it's often the case that something goes wrong. Early miscarriages are incredibly common — many women miscarry before they even realize they are pregnant — and most are due to nothing more than a chromosomal mixup. As Dr. Bryan Cowan, chair of the department of obstetrics and gynecology at the University of Mississippi Medical Center in Jackson explained to Parenting, "Mismatched chromosomes account for at least 60 percent of miscarriages." And as upsetting as that can be, it's ultimately just a reality of the human body.

Complicating matters further though is that significant fetal abnormalities or other complications don't always result in miscarriage. In these cases, termination is often the medically-advised option, particularly when the mother's health is affected (aka someone who is definitely a human being with a right to her own body). But a definition of life beginning at conception can change what would otherwise be considered the best medical option, as the fetus would ultimately have to be carried to term, regardless of the outcome.

3. Without The Mother, The Embryo Wouldn't Survive

Perhaps the most obvious argument against the idea of life beginning at conception though is that it takes a long time after conception before that fertilized egg will have become a baby capable of survival outside of the womb. In many cases this happens around 22 and 24 weeks gestation, according to TIME, yet many babies born around the time of fetal viability still need quite extensive medical intervention to live (and many die, even then).

It's not exactly news that a fertilized egg can't survive on its own, but it's actually a very important distinction from a technical standpoint. As David Orentlicher noted in a post for the Harvard Law School blog, Bill of Health, if a fetus needs its mother's body to exist prior to viability, then it means the woman is essentially lending her body to her fetus to allow it to survive. Again, that fetus might eventually be able to be a human being existing in the world independently (from a biological perspective, at least), but for a long while, it is entirely dependent on the mother's body to sustain it. While making conception the beginning of life might be helpful for anti-abortion advocacy, it unnecessarily infringes upon the rights of women, who could then be expected to continue to share their bodies with a growing fetus, regardless of whether they want to or not.

Abortion has always been an incredibly controversial topic, and it's unlikely that that will change anytime soon. But ideological notions of protecting babies from "murder" just don't align with what science and medicine knows to be true: that there isn't much about making conception the beginning of life that is actually helpful or valuable. With the HHS strategic plan though, the Trump administration has indicated that it fully intends to merge ideology with science, and that is incredibly concerning.