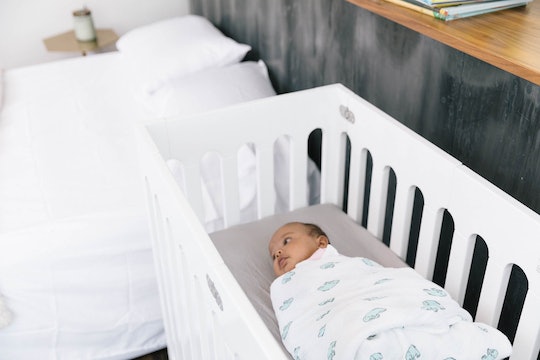 Putting your baby to bed can be a source of concern for many parents, given the risks sleeping babies face. Because of this, it's crucial to know the ways to reduce the risk of SIDS when you put your baby in a crib. Before you can know how to reduce SIDS, however, you have to understand SIDS and its risks. Sudden Infant Death Syndrome (SIDS) refers to the unexplained death of a baby during sleep, according to the Mayo Clinic. At this time, its exact cause is unknown. Studies suggest, however, that SIDS results from problems with an infant's ability to regulate breathing and arousal during sleep, as further explained by the Mayo Clinic. It's still a mysterious and heartbreaking condition, though.

As far as good news is concerned, incidents of SIDS have declined sharply in recent years. In 2015, approximately 1,600 infant deaths were attributed to SIDS, according to the Centers for Disease Control and Prevention (CDC). This works out to about 40 deaths per 100,000 live births in 2015, a dramatic decrease from the rate of 130 deaths per 100,000 live births in 1990, as further noted by the CDC. Although SIDS has declined sharply in recent years, it's still a big worry for many parents.

So how can parents best ensure safe sleep for their infants? Many practices can decrease the risk of SIDS. First and foremost, babies should sleep on their backs, according to the American Academy of Pediatrics. This position ensures your baby gets as much fresh air as possible. Next, making sure your crib meets current safety standards is crucial. To reduce the risk of suffocation, cribs should be free from loose pillows or blankets, which could present strangulation hazards, according to the United States Consumer Product Safety Commission. A bare, firm crib mattress is best. Lastly, the best step you can take is to put the baby's crib in your bedroom. Sharing a bedroom with parents, but on a separate sleep surface, may decrease the risk of SIDS by 50 percent, according to the American Academy of Pediatrics. This setup allows parents to monitor the baby closely, but it does not present an increased risk of suffocation found in bed-sharing. Basically, infants who sleep on their backs on a firm, bare surface in the same room as parents appear to have a much lower chance of suffering from SIDS.