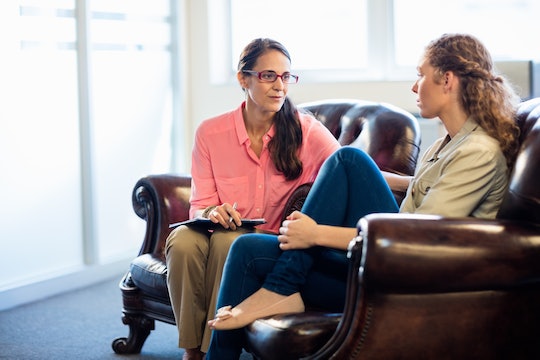 3 Ways You Sabotage Your Mental Health, Based On Your Zodiac Sign

There are many things — good and bad — that you do to yourself everyday. And while you may never have spent much time thinking about it before, it's kind of fun to look at it based on your zodiac sign, because whether you wholeheartedly believe that you're the spitting image of the typical person depicted by the personality traits, likes, and dislikes of your Sun sign or not, you can often at least recognize bits and pieces of yourself in your sign. There might even be ways you sabotage your mental health, based on your zodiac sign, which you'd definitely want to know more about.

Your mental health is just as important for you to take care of as your physical health. Whether it's going to regular appointments with a therapist, getting screened for or treated for certain conditions, or just being kinder to yourself, and doing things that help give you what you need, there are many things that you can do to proactively take care of your mental health. But there are also some things that'll sabotage your mental health and while those things might vary from person to person or based on the circumstances, knowing what you might be more likely to do to negatively affect your mental health based on your zodiac sign can help you be on the look out for these behaviors and hopefully keep you from doing yourself a major disservice — or even inadvertently causing yourself harm.

More Like This
Mental Health Stories Are Family Stories
Exclusive: Watch Hayden Panettiere Talk About Addiction Treatment 4 Months Postpartum
This Is What It’s Like To Parent With OCD Right Now
Up In The Middle Of The Night? We've Got Instagram Captions For That