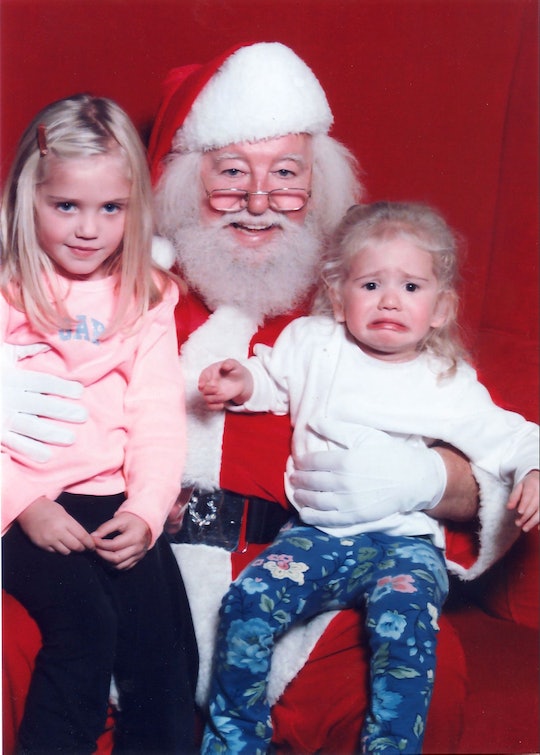 Each year at Christmas, thousands of kids are encouraged to climb onto a stranger's lap where he grills them about their behavior and then they are supposed to ask him for toys. The kids are dressed in their finest red and green clothing, their hair styled perfectly, and then dragged to a crowded mall to wait in line to see a fat old man with a big white beard. Put like that, it sounds kind of odd, yet many families treasure the tradition and we have 30 modern and vintage photos of kids sitting on Santa's lap to prove it.

Santa is a legendary figure in the world of Christmas and the idea of getting a photo with him is often too irresistible. Many families use a Santa's lap photo for their holiday cards and many proudly display the yearly photos in their homes. It's such a lure that shopping malls build their entire Christmas displays around Santa and his elves (plus the photographer and helpful mall workers).

Of course when kids are involved, even the most well planned outings can go awry. And to many kids, it's pretty scary to sit on a stranger's lap, especially one with a beard so long it covers most of his face. Which means that it's not a huge surprise when the little ones get teary eyed as they sit there. Many will writhe and try to fight their way out of the situation, but the photographer still manages to get that photo and the parents will buy it, or snap it quickly on their own, realizing that they've gotten a very real (and often pretty funny) memory of that year's Christmas. Poking fun at this, Jimmy Kimmel even has a new tradition of showing a cropped photo of a child's crying face and asking the audience to guess if the child is on Santa's lap or getting a flu shot. Apparently the trauma is not so different.

We thought it would be fun to look back at Christmases past and present to commemorate the Santa's lap tradition and with it, the good, the bad and the hysterically crying. So sit back, and take a trip down memory lane with these photos funny photos of kids sitting on Santa's lap that go as far back as the '50s. Oh, and see if you can spot a trend.