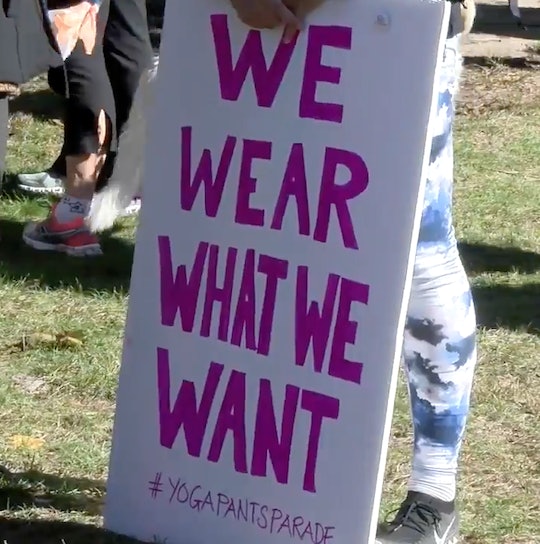 As a mom, and a woman in general, I am big fan of yoga pants and leggings. They're comfortable, versatile, often more affordable than jeans, slightly more polished than sweatpants, and let's be honest, who wants to ruin their lives by wearing pants that button when you have blessed elastic-waist options instead? But while yoga pants are fiercely adored by many women, they're not without vocal critics. And after one of those critics wrote a fat-shaming letter to his local newspaper admonishing women for wearing yoga pants in public, more than 300 women participated in a yoga pants protest to remind him that, actually, how anybody looks in their clothes is really nobody else's business.

According to The Washington Post, 63-year-old Rhode Island man Alan Sorrentino's letter to the editor was published in the Barrington Times Wednesday, in which he argued that women wearing yoga pants as regular pants are "the absolute worst thing to ever happen in women fashion," adding that, "not since the mini-skirt has there been something worn by so many women who should never have it on in the first place." Sorrentino went on to say that adult women should "grow up and stop wearing them in public."

It's hard to even really understand exactly why Sorrentino would have felt so personally offended by women's pants that he felt compelled to write a letter about it in the hopes that it would be published. Yet feel compelled he certainly did — and he didn't hold back. Sorrentino then wrote that it was "weird" and "disturbing" that anyone who isn't young or thin would wear yoga pants in public, and even made recommendations of other clothing options he felt would be more appropriate, as though all women were not only entitled to his opinion, but that they should care about it and consider it, too:

Like the mini-skirt, yoga pants can be adorable on children and young women who have the benefit of nature's blessing of youth. However, on mature, adult women there is something bizarre and disturbing about the appearance they make in public. Maybe it's the unforgiving perspective they provide, inappropriate for general consumption, TMI, or the spector of someone coping poorly with their weight or advancing age that makes yoga pants so weird in public.

A nice pair of tailored slacks, jeans, or anything else would be better than those stinky, tacky, ridiculous looking yoga pants. They do nothing to compliment a women over 20 years old. In fact, the look is bad.

Unsurprisingly, Sorrentino received plenty of backlash from commenters and on social media for his ridiculous letter, but a group of local women decided they'd take their response one step further — namely, a parade through Sorrentino's neighborhood (in yoga pants, of course).

But while Sorentino's letter may have been the inspiration behind the so-called "Yoga Pants Parade," organizer Jamie Burke explained that the issue was much greater than just one man's opinion. On a webpage created for the event, Burke wrote,

The parade is not about yoga pants, it is a positive response to casual sexism. It is a march of love of ourselves, and the love and support of each other regardless of size, shape, or wardrobe choice. It is a way for us to protest body shaming and the long history of men policing our bodies. It is above all, a march of community and love.

In a Facebook event page, Burke called for peace, and emphasized that the walk was meant to be a positive event, not a confrontation, telling participants "please do not come for a fight." The walk ended with an outdoor yoga class, and the group also collected personal hygiene items, diapers, and breast pads for a local domestic violence shelter.

One person who was clearly not impressed though was Sorrentino himself, who called the march "vicious and intimidating," and who told WPRO 630 that he received death threats from people as a result of his letter. While Burke said on Facebook that Sorrentino "impolitely declined" her invitation to join the march himself, he did opt to hang a banner that read "FREE SPEECH" outside his house to make a statement as participants walked by.

Sorrentino has since claimed though that the letter was actually meant to be a joke in response to the tense political climate leading up to the presidential election in November. He told WPRO 630:

It was a joke. With all the letters being written about all these crazy political issues, I thought it'd be funny to have a break in it all, and so I assumed the character of this grumpy old man that was railing about women in yoga pants because he was too uptight to just relax and accept himself in his age and in his own weight and was infuriated by these women that were so comfortable with themselves that they could wear whatever they want. It was really a joke, it was meant to sound stupid and creepy.

He also took issue with the fact that the march could even happen in the first place, arguing that a double standard exists for men:

If I were doing this to a woman, I'd be arrested immediately. If a bunch of men decided to march by a woman's house because of something she wrote in the paper, they'd get arrested. The fact that this is seen as an appropriate reaction to the letter I wrote in the paper is really disgusting.

Even if Sorrentino's letter really was meant to be a light-hearted joke, there's no doubt that it struck a nerve with women who have felt the weight of body-shaming and sexism throughout their lives (even young girls, for example, are subjected to sexist school dress codes that teach them their bodies are allowed to be objectified by others). Whether you love yoga pants or totally hate them, the Yoga Pants Parade was a reminder that no one has the right to tell anyone else how they should dress, look, or act. And that's a pretty valuable message.