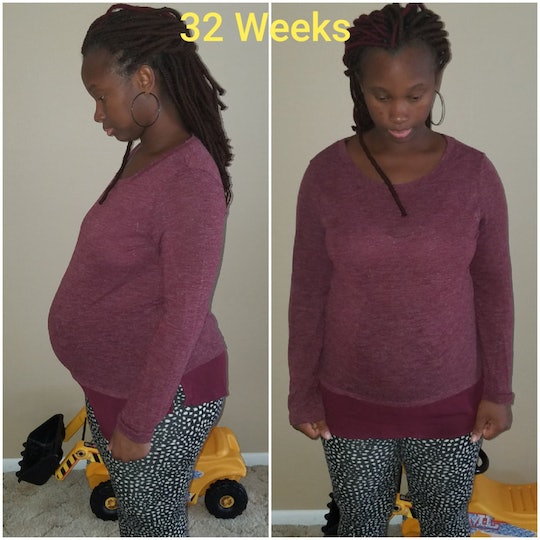 Worrying About Birth Complications Before They're Even Born

Ambreia has a 2-year-old son and has been trying for a second child for a year and a half. This is the ninth installment of her Trying diary. You can read the previous entry here.

This past month passed by as a blur. The number of doctor's appointments increased, the anxiety also grew, but the determination kicked in as well. The four weeks that it took to get more information on my baby's diagnosed "growth restriction" passed slower than any month I've ever experienced in my life. I was 32 weeks pregnant, and feeling down.

My husband was gone for work again so there were a lot of moments I felt like I was dealing with parenthood and the emotional consequences of pregnancy alone. I can't be upset at him for what he does for our family. But there are moments that I feel he has to leave for work at the most inconvenient times. It's not ideal for him to be gone while I handle the uncertainty of what it means to have a baby with a growth restriction. But in life, you do what you have to do to make it.

Despite all of that, I walked into my next appointment hopeful that things had improved or at least stayed the same. Sadly, the doctor informed me that she had dropped down to the 7th percentile and was officially diagnosed with an intrauterine growth restriction (IUGR).

Of course a Google search made things worse — I didn’t find many stories of comfort.

I knew an IUGR meant she would be small. And on its own, that information doesn't mean much. My husband and I are not particularly tall people, so it's not surprising that our baby isn't huge. But the scary part is her size can be a result of more serious complications, defects or even nutritional deficiencies with her placenta.

Right now, we don't know which one it is but we've decided that I'm going to have to go into the doctor once a week for non-stress test and ultrasounds.

If the doctor decides that early delivery is the only way to monitor her for any more issues, I'll do it.

The worries calmed down a bit and I did what all of the women before me have done when faced with something unknown. I called on my support system, send out my vibes and prayers for her and my health, and I kept pushing on.

We can't answer any questions about the likelihood of an early delivery because we don't know what's causing her growth restriction so far. Through the next few weeks we're going to monitor it more often and I'm nervous. As a black woman, my chances of preterm delivery are quite high. I don't want to thrust my baby into the world before she has the brain and lung development to thrive. But at the same time, if the doctor decides that early delivery is the only way to monitor her for any more issues, I'll do it.

This month wasn't all bad. I did get a break from overworking while juggling a rambunctious almost-3-year-old. For the last few weeks, I have been sending McChub to part-time care three times a week. I think the biggest highlight of my month was seeing McChub begin to bond with the baby. I don't read too much into it because I know he's only a toddler but he started telling my belly "goodnight" each night. It's kind of cute and kind of funny. But then when I say are you ready for sister to come home he says no, so we have a lot of work to do. LOL.

This was also the first year that McChub was old enough to go trick or treating! We walked our neighborhood and had an amazing time I think he's addicted to Halloween. And yes, I was that horrible parent who rationed the candy and stole some of it for themselves.

With all the chaos going on in our lives right now I'm just glad that our oldest child gives me a reason to smile each day. No matter how rough the night before, I wake up ready to love and laugh with him all over again — but that doesn't mean I'm not ready for his dad to come home!