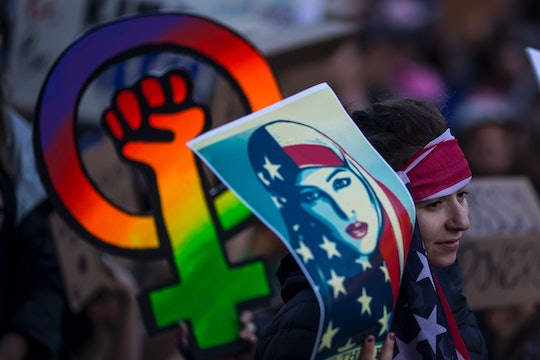 Activists Make The Movement Work, So Support Them

For its millions of attendees around the country and the world, the Women's March was exhilarating. Invigorating. A balm for aching hearts as Donald Trump takes over the Oval Office. It was a massive show of unity, but the physical crowds have now dispersed. The next step, of course, is to keep that momentum going, continue fighting together to protect civil rights and demand social justice as people who have never before been politically active coalesce around a movement. The past and future successes of the budding resistance, however, would be impossible without the arduous, often thankless and usually unglamorous organizing of activists who have been fighting the fight since before the masses adopted the cause. To keep leading us, activists need support after the Women's March as much as ever — and here's how to do your part.

Although Saturday's marches are over, the Women's March organizers are still here to assure that they are very much just getting started. With the organization's 10 Actions for the First 100 Days, they're introducing one concrete initiative for those who activist spirits were awakened while marching or by Trump's vitriol to complete every ten days at the beginning of Trump's presidency. Step one is to "Write a postcard to your Senators about what matters most to you." Once that's done, it's a great idea to figure out which activists to support while waiting to learn what the next action is. some of these activists take donations directly to their Paypal accounts, while others are voices we should listen to and prioritize.

Having worked as one of the four core organizers of the Women's March, Mallory is certainly no newbie to activism. After losing her son's father to gun violence 15 years ago, she eventually advised Vice President Joe Biden about how to strengthen federal gun restrictions, The New York Daily News reported in 2013. She's also the executive director of the National Action Network, a nonprofit civil rights organization that Rev. Al Sharpton founded in 1991. Connect with Mallory on Twitter.

Another of the Women's March top organizers, Linda Sarsour is "every Islamophobe's worst nightmare," as she's described on the Arab American Association of New York's website. There, she's the director, and in that capacity has led charges against injustices like unwarranted surveillance of New York's Muslim communities and the police practice of stop and frisk. Honored as a "Champion of Change" by the White House, Sarsour was incredibly busy with her activism even before she assumed the responsibilities of planning the Women's March. "I don’t really have time to do it, but you know what? I’m so angry at the things that are around me that I’m going to take that anger and translate it into some productive work, which is what I’m doing now for this march," she told W Magazine shortly before the worldwide event. Connect with Sarsour on Twitter. You can also donate to the Arab American Association of New York here, or consider supporting your community's organization for Arab Americans.

The daughter of South American immigrants, Mercado has dedicated her professional life to advocating for immigrants' rights. She's the co-chair of We Belong Together, which is made up of women pursuing "common sense immigration policies," and previously helped pass the Domestic Worker Bill of Rights in California. Connect with Mercado on Twitter. You can donate to the National Domestic Workers Alliance here.

Perhaps one of the most recognizable faces (along with his signature blue vest) of the Movement for Black Lives, DeRay McKesson is an activist, organizer, and educator. A key member of the data-informed platform Campaign ZERO, which is dedicated to ending police violence in the United States, McKesson also helped to build the Resistance Manual. It's a comprehensive guide to resisting Donald Trump's agenda, with information about how to fight against the repeal of the Affordable Care Act, pushing back against mass incarceration, and much more. McKesson is all over the advocacy realm, and he's dedicated to drawing in new activists to the social justice cause. Download the Resistance Manual, to start, and connect with McKesson on Twitter. Donate to Campaign Zero here.

As important as it is to support the vital work of these and other activists with either money or time, it's just as crucial to learn from them and follow their examples. This is not a comprehensive list. There are dozens of LGBTQ organizers, reproductive rights organizers, organizations for Native people, and more intersectional organizations that need your time, but this is a good place to start.