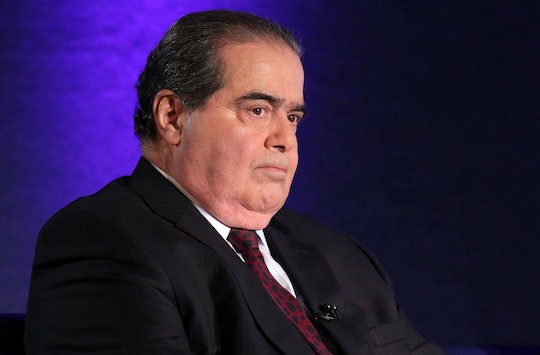 4 Antonin Scalia Conspiracy Theories, Because Of Course The Internet Went There

It wasn't long after Supreme Court Justice Antonin Scalia's death that conservatives — and some liberals, too — began to question the account of what happened the morning of Feb. 13. Scalia was 79 years old and not in the best of health, but had he really died of natural causes, or was it something more mysterious and evil? This list is only a small selection of the reigning Antonin Scalia conspiracy theories, but it's enough to prove that the Internet is a weird place.

But, first, the facts. The morning of Saturday, Feb. 13, news outlets reported that Scalia had been found dead at the Cibolo Creek Ranch in West Texas. After local police officers on the scene reported that there were "no signs of foul play," County Judge Cinderela Guevara pronounced Scalia dead of natural causes. She also communicated with Scalia's doctor, who was able to provide a list of Scalia's chronic health issues. That was enough for Guevara. She made her pronouncement of his death over the phone.

Still, conspiracy theories bloomed for a few reasons. Mother Jones reported that Scalia had not wanted security on this trip, so there were no attendant marshals or bodyguards (i.e. no witnesses). Second, there was no autopsy performed. Since Guevara had pronounced him dead by natural causes, she had no reason to order one. Scalia's family also made it clear that they did not want one. These early events are important to conspiracy theorists. The final key event that really set the theory ball rolling was that Scalia was allegedly found with a pillow over his head. Scalia was found by the owner of the resort where he was staying. That man, John Poindexter, told CNN, "He had a pillow over his head, not over his face as some have been saying…The pillow was against the headboard and over his head when he was discovered." Believe it or not, this is enough to make a well-spun conspiracy theory or two. Or three. Here are a few:

President Obama Was Behind It All

The conservative talk show host Alex Jones presented this murder theory on his radio show, according to Mother Jones. He said, "You just get used to this: 'Scalia found, it's natural, nothing going on here, he just died naturally.' Then you realize, Obama is just one vote away from being able to ban guns, open the borders, and actually have the court engage in its agenda, and now Scalia dies. My gut tells me they killed him, and all the intellectual evidence lays it out." He later back-pedaled quite a bit, but it was too late. The White House press office didn't immediately respond to Romper's request for comment on Obama's alleged involvement.

Radio host Andrew Wilkow also had his own theory about the president's alleged involvement. During his show, The Wilkow Majority, he said, "The unwrinkled bed clothes and the pillow over the head, over the face. This is odd. It's just odd. Given that this is a Supreme Court justice and we are seeing the waning months of a presidential term where the president's only way, his only way, his only avenue to complete his agenda is through a series of 5-4 rulings. An opening on the bench would give him that." He didn't stop there.

Hmm, how would that happen? It's just a little too, how you say, coincidental? That the only thing standing in the way of Barack Obama's agenda being fully completed in the next 11 months is a potentially divided court that goes 5-4 against him. Just, you know, little coincidental. Andrew, what are you saying? I'm not saying anything. It would be highly irresponsible of me to sit here and accuse the president of the United States of murdering a Supreme Court justice. It's still coincidental. Just a little too coincidental.

To quote, "Andrew, what are you saying?"

It Was A Pillow Assassination

Naturally, Donald Trump weighed in on the Scalia's death. During an appearance on the conservative show The Savage Nation, Trump called Scalia's death "pretty unusual." He said:

It's a horrible topic, but they say they found a pillow on his face, which is a pretty unusual place to find a pillow.

One of Trump's talents is fanning the flames of rumors, and he did not hesitate to add gas to this pillow-assassination theory. Host Michael Savage was happy to go along with it, and even called for an investigation of the incident. But now that I think about it, it is pretty unusual to sleep with pillows... maybe Trump is on to something.

According to The Washington Post, William Richie, former head of criminal investigations at the Washington, D.C. police department, took to Facebook to list the ways Scalia's death was poorly handled and insufficiently investigated. He wrote, "As a former homicide commander, I am stunned that no autopsy was ordered for Justice Scalia," according to the Post:

How can the Marshal say, without a thorough post mortem, that he was not injected with an illegal substance that would simulate a heart attack…Did the US Marshal check for petechial hemorrhage in his eyes or under his lips that would have suggested suffocation? Did the US Marshal smell his breath for any unusual odor that might suggest poisoning? My gut tells me there is something fishy going on in Texas.

Richie to world: there's something rotten in the state of Texas.

Hillary Clinton Did It

When investigating a death, look for who would profit. That's what noir-style P.I.'s always say, at least. Former Secretary of State Hillary Clinton definitely has something to gain form Scalia's death, as do all women fighting for access to birth control, abortions, and oh, say, equality. According to Liberty News Now, there is sufficient evidence to claim that Clinton was indeed behind Scalia's death. Clinton's press office didn't immediately respond to Romper's request for comment.

What's Liberty News' proof? When Clinton was asked on the campaign trail if she would consider appointing Obama to the Supreme Court, she said, "What a great idea." Here's Liberty News Now's reasoning:

Clinton has been running against her socialist opponent, Bernie Sanders, as a continuation of the Obama legacy.What better way to continue to give voice and power to the Obamas than to place the two-term president on the highest court in the land?...But like all evil plans, someone has to die to get the ball rolling. Enter Antonin Scalia. The vacationing justice was relaxing in an area so remote; his death certificate was signed over the phone.

It's all too coincidental, no? From the pillow, to the missing autopsy, to the list of people who would have wanted him dead — there's plenty to go on. (Not really.) I didn't even get into the Illuminati branch of Scalia death theories. Still, the reality of the situation is that Scalia died naturally, and now his place on the Supreme Court needs filling. No amount of conspiracy theories will change that, and his legacy should be remembered positively.