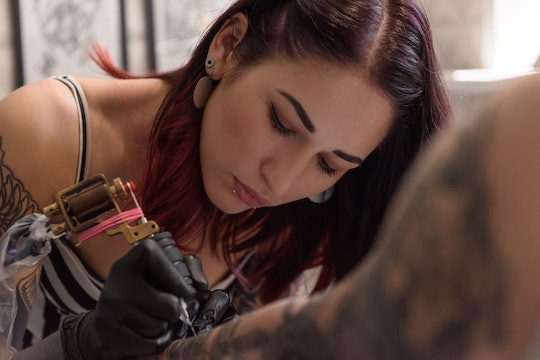 Although they've become much more mainstream in recent years, tattoos are still a source of misunderstanding for plenty of people. Chances are, anyone with a semi-visible tattoo has heard a few weird comments over the years. But the artists have heard it all and then some. Really, the biggest misconceptions about tattoos that tattoo artists are sick of hearing have been around for way too long. It's time to stop bugging artists with these same comments over and over.

Because they're so commonplace now, it's a little surprising these old myths about tattoos are still around. About four out of every ten American adults has at least one tattoo, according to Statista. On top of that, about a quarter of American adults have several tattoos, as further noted by Statista. Everyone from preschool teachers to CEOs to accountants rock tattoos these days, so they're far from unusual. People get tattoos to honor loved ones, express their interests, or just because they felt like getting a tattoo that day.

Still, though, the silly myths persist when it comes to this particular form of art. To learn more, Romper spoke with tattoo artist Michaelle Fiore who works out of NY Heart and Dagger in Bushwick Brooklyn. Fiore addresses the truth behind tattoos.