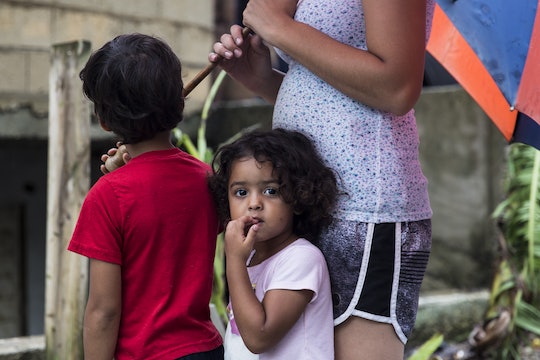 4 Children's Charities In Puerto Rico That Need Your Support

With Hurricane Maria headed toward the U.S. mainland, the monster storm has churned a wake of destruction throughout the Caribbean, most notably in the U.S. territory of Puerto Rico. According to officials, much of the island is without electricity, and communication both within and to the island itself is down. Of Puerto Rico's 3.4 million residents, nearly 5 percent are children under the age of 18 — and they are perhaps one of the most vulnerable populations, thus why they really need help. Here are four children's charities in Puerto Rico to donate to, because in the wake of such disaster, cash donations are needed more than anything else.

On Monday, Gov. Ricardo Rosselló told CNN that Puerto Rico is on the verge of a "humanitarian crisis," and its needs for relief funds are immediate and dire. In addition to battering the island territory with winds in excess of 150 mph, Hurricane Maria dumped historic amounts of rain, causing catastrophic flooding throughout the island. The deluge of excess water has proven too much for the Guajataca Dam, which could collapse due to damage sustained during the hurricane.

It's also important to remember that there is still more than a month left of hurricane season, and it's still very much a possibility that Puerto Rico could see more hurricanes or tropical storms, which makes donations to these children's charities that much more imperative.

This international children's relief organization is already on the ground in Puerto Rico and it has created a dedicated children's fund for Hurricane Maria. According to Save the Children, more than half Puerto Rico's children live below the federal poverty line — which is a reminder that yes, these kids and their families are American citizens. You can donate to the Hurricane Maria Children's Relief Fund online.

As the children's fund of the United Nations, UNICEF is a vital presence helping children recovering from Hurricane Maria's devastation in Puerto Rico. While most of UNICEF's emergency relief efforts are focused on international crises, UNICEF is now responding to the natural disaster that's happened in its own backyard. According to its Twitter feed, UNICEF has begun to mobilize Puerto Rico relief efforts for children. You can donate to UNICEF's Hurricane Relief Efforts in Puerto Rico campaign online.

I'll refrain from making any "Living La Vida Loca" puns — but Ricky Martin has committed to step up to help the children and people of Puerto Rico. In 2004, Martin founded his eponymous foundation to advocate for and help children around the globe. While the foundation website no longer appears to be working, the Ricky Martin Foundation Facebook page is active and sharing updates. On Friday, a very grim-faced Martin posted a video to his Instagram asking for support, telling fans that "Puerto Rico is in a precarious position at the moment." Martin is collecting donations for Puerto Rico via a dedicated YouCaring page, Ricky Martin for Puerto Rico.

Puerto Rico has already faced a number of challenges prior to Hurricane Maria making a direct hit on the U.S. territory, including the wrath of Hurricane Irma and an ongoing and worsening economic situation. Efforts to recover and rebuild in Puerto Rico will extend for months — and possibly even years — to come, and we need to step up to help out some of Hurricane Maria's youngest victims.

More Like This
What Exactly Are Minions, Anyway ?
Family Of Grandfather Killed In Highland Park Mass Shooting Say He "Saved" Their Lives
Megan Fox Explains Why She Asked Machine Gun Kelly If He Was Breastfed As A Baby
Barack & Michelle Obama Shared The Most Adorable Baby Photos Of Malia On Her Birthday