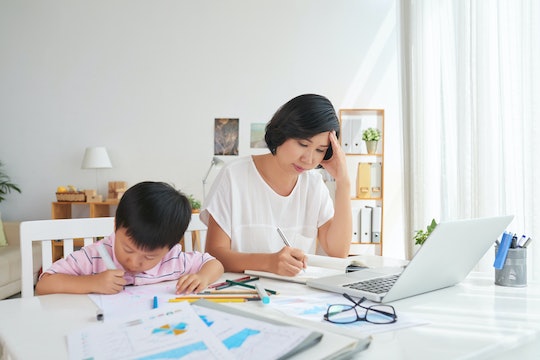 Raising children is tough, but when you're a working parent, it can feel like the odds are stacked against you. And it's not because you can't just achieve that elusive work-life balance on your own. Instead, research shows that the lack of supportive policies and laws in the United States makes it harder for employed parents — in particular, working mothers — to fulfill their professional and personal responsibilities. Just consider these four facts about moms' equal pay day as proof.

Wednesday marked Moms' Equal Pay Day for one simple reason: Estimates from the National Women's Law Center (NWLC) show that it takes roughly five months — or 150 days — into the year for the average working mother to earn what a father had made in 2017. And why is that the case? Because thanks to the "motherhood wage penalty," women with children make less than dads across states, education levels, occupations, and ages, according to the Center for American Progress. And that wage gap doesn't only exist among mothers and fathers; working moms also face greater wage penalties than their childless counterparts.

A Mom Makes Less Than Three Quarters To A Dad's Dollar

How much less? Overall, around 29 cents. It's well-known that the average working women makes 80 cents to a working man's dollar, according to the American Association of University Women. But recent data released by the NWLC revealed that, on average, moms who work full-time, year-round only earn 71 cents of a working father's dollar. So even if you have the same education and experience as a dad or a woman without kids, you're still making far less because you're a mother.

But It's Worse For Moms Of Color

The wage gap is as much a racial justice issue, as it is a gender equality one. Why? If you're a working mother of color, the wage gap is even broader. Working Latina mothers make 46 cents to a dad's dollar, while Native American moms earn 49 cents, and Black moms take home 51 cents, according to NWLC data. White moms, on the other hand, make 69 cents to a father's dollar, while working Asian American-Pacific Islander moms earn 85 cents, NWLC data revealed.

Single Moms Are Short-Changed, Too

Overall, single mothers earn considerably less than their married counterparts, according to the Economic Policy Institute. In fact, research has found that single working mothers are paid 57 cents for every dollar a father earns — and that's across race and ethnicity. However, it's important to note that Black, Latina, and Asian women represent a disproportionate share of women who parent solo, according to the Pew Research Center — nearly 60 percent, to be exact. That means mothers of color who work experience a greater financial burden due to compounded discrimination.

Although specific numbers aren't available regarding LGBTQ moms and pay rates, research does show that LGBTQ people earn less because of anti-LGBTQ bias. A Prudential Financial survey published late last year found that lesbian women and gay men are paid less than their straight counterparts, respectively, according to Forbes — a pay gap more pronounced when accounting for race and gender identity. The disparity in wages also exists between lesbian and gay couples. The median personal income for women in same-sex partnerships is $38,000, compared to $47,000 for men in same-sex relationships, according to the National LGBTQ Task Force. It would stand to reason, then, that LGBTQ moms earn fewer dollars than gay and straight dads, in addition to facing workplace discrimination that puts their personal and financial health at risk.

It should go without saying that working moms shouldn't have to pay the price because they've chosen to raise children and maintain their careers. But they do, and it's made worse by the fact that fathers actually receive a pay bump, according to Third Way, because they have kids. To say this pay disparity is ridiculous and offensive — and that it needs to end — would be an understatement.