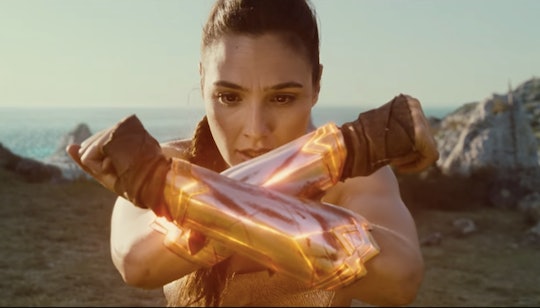 For a very long time, it felt as if most superhero film franchises, television shows, and comic books weren't setting the best example for little kids or providing them with a lot of diversity to look up to. The heroes of these adventures tended to be male, and if there were any women involved, they were usually there to be rescued or to act as a sidekick with ineffective "breast armor" or high-heeled boots (come on, who wears those when kicking butt?). Thankfully, it seems that the superhero world is finally starting to catch up with the times: The new Wonder Woman film, produced by the DC Extended Universe through Warner Bros., follows the story of Diana Prince, and her journey to become, well, Wonder Woman. And if the latest trailer for the film is any indication, it's clear that this new classic will be exactly what women and girls across the world need to see right now — because there are plenty of feminist things the new Wonder Woman trailer teaches kids and adults alike.

The new trailer, released Saturday night, highlights Diana's journey from a little girl, growing up among other Amazon warriors, to her eventual role as a kick-ass superhero (Wonder Woman), fighting crime and taking names throughout London and beyond. And while the film won't be out in theaters until June, the trailer alone provides important insight and lessons that everyone can appreciate. Feminism is still (unfortunately) a confusing topic for some, but the new Wonder Woman trailer is the kind of fun, entertaining teachable moment that has the power the change even the most stubborn of minds.

It Proves The Haters Wrong

One of the first lines in the trailer is one delivered to a young Diana, as she is being taught about the legends of her people. Little Diana asks who would be able to be strong enough to use a sword, and is told "only the fiercest among us even could, and that is not you, Diana." After those words are spoken, it's clear that Diana's determination to prove everyone wrong has set in, and she begins training to become, literally, the fiercest among them.

As every woman knows, sometime in life, people will try to knock you down. They'll tell you that you aren't strong enough, big enough, brave enough, or smart enough. But all girls have the power to accomplish great things, and, honestly, proving the haters wrong is such a satisfying feeling. (Plus, remember when those haters said no one would want to see a stand-alone Wonder Woman film? Yeah.)

It Proves Girls Can Be Badass Too

Obviously, Wonder Woman is about a strong, badass female. And while there may or may not be a love interest in the movie — Chris Pine is in it, so, as most comic book movies these days go, anything is possible — the main storyline follows Diana. She is the star of the movie, she is the strong one, the fighter, and the badass. She starts life as a little girl, but ends up saving the world. If that's not a positive message of feminism and equality, I don't know what is.

In the past, the boys may have gotten all the cool one-liners, the cool swords, and the badass storylines, but Wonder Woman proves that her story and lineage are just as badass as anyone else's.

Obviously, Wonder Woman is incredibly powerful. She's an Amazon warrior who was raised almost entirely by her mother and aunts, and still turns out to be stronger than all the other boys on the playground (metaphorically speaking, of course).

The film seems to follow the legend that Wonder Woman is the daughter of literal goddesses (specifically, Queen Hippolyta, who herself was the daughter of Ares, the Greek god of war); The trailer proves that a little girl raised by women — even with her crazy amazing superhero powers — can still grow up to be stronger than men, in many different ways, despite common societal beliefs that make people believe women are the weaker sex. Kids everywhere could benefit from that lesson.

It Proves That Greatness Can Come From Anywhere

The trailer also shows kids that they don't have to come from a giant city, or live in a luxurious mansion, or have a fawning crowd of admirers behind them to go far in life. Even though we currently have a president who got his start from a small loan of several million dollars, that doesn't mean that you have to have money to achieve greatness. Wonder Woman comes from a world cut off from the rest of society, and she isn't immersed in glamour or fame. And despite her innate powers, it takes years of training and persistence to channel those things into something great. Mini-future presidents, CEOs, and rocket scientists, take note.

Wonder Woman may have been blessed with supernatural powers, but she doesn't take anything for granted. In a culture that tells young girls they can't achieve as much as their male counterparts, or that they must resort to traditionally feminine "wiles" to win people over, Wonder Woman is the kick of feminist adrenaline everyone needs.