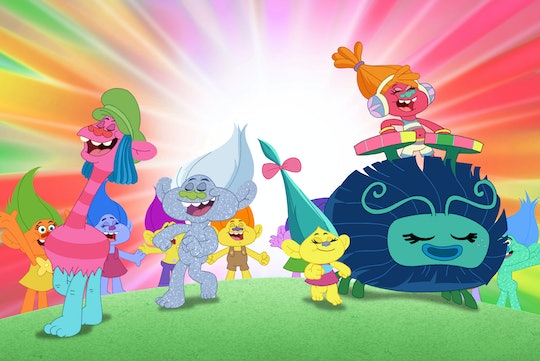 There's a lot to love about Netflix — it entertains kids, parents, and everyone else in between for hours on end. It's the easiest solution to every problem. Are the kids feeling down? Throw on Netflix and watch them perk up. Need to shower? Throw on Netflix and the kids won't move for hours. TBH, Netflix is a godsend, parents will be delighted to know about these four kids shows coming to Netflix this January that are guaranteed to keep your kids happy and entertained.

The comedown from the holiday season can be just as stressful as the holidays are. After days of presents and parties, kids will probably be looking to continue to be entertained after the holidays. This, combined with snow season, can make for some serious cabin fever — and this is where Netflix comes in to play. But after watching every single Netflix kids show over the holidays, it's likely that parents (and kids) are looking for something new to watch.

The great news is, there are four new kids shows that are coming to Netflix this January that will make everyone in the family happy. It's time to get excited, because the new seasons of TV shows and series debuting on Netflix are worth watching.

Since debuting on Netflix at the beginning of the year, Trolls: The Beat Goes On! is back for a brand new season, debuting on Netflix on Tuesday, Jan. 18. This season will be just as exciting as the last four. In the newest installment of Trolls: The Beat Goes On!, the trolls "get lost in wormholes, journey to the fountain of glitter, go for a ride in a submarine, and play in the snow" among other super fun activities, according to Netflix.

This show is perfect for fans of the Trolls movies, previous seasons of the Netflix series, and any kid (or parent) who enjoys seeing lots of colors and catchy music on their TV screens.

Netflix's newest cartoon series for kids, Pinky Malinky, seems like the kind of classic cartoon series that parents would have loved as a kid. Pinky Malinky is about a kid who loves having fun with his friends and family — but he just so happens to be a hotdog due to a "rare genetic mutation." The trailer for the series shows that the show will be equally parts absurd, fun, and super entertaining to viewers.

The show, which is classified as "goofy" by Netflix will debut on Jan. 1, which means that kids can get their fill of this show by the end of their holiday break from school.

The character, Carmen Sandiego, is getting a new life on Netflix with the new series, Carmen Sandiego. People are probably familiar with the titular character from the 1980's computer game series, Where In The World Is Carmen Sandiego?, the PBS game show from the early 90s, and the animated series that followed shortly after, according to Deadline.

But now, the people who grew up with Carmen and new generations will get to be entertained by this new Netflix series. The series, which debuts on Jan. 18, will follow Carmen as she goes on "new international capers" for 20 episodes (which are 22 minutes long, according to Entertainment Weekly).

A Series of Unfortunate Events Season 3

The unfortunate show based on the young adult book series, A Series of Unfortunate Events by Lemony Snicket, is coming to its unfortunate end. But hopefully that means the Baudelaire children will get a happy ending.

The final installment of the Netflix series will air on Jan. 1, hopefully solving the many mysteries of VFD, Count Olaf, and the Baudelaire's parents. Although the series is pretty dark (and best recommended for kids over the age of 10, according to Common Sense Media), this newest installment will hopefully provide a satisfying end for the viewers who have tuned in to previous seasons of the Netflix show.

That's a pretty nice lineup, and good news, grown ups: there's so much more for adults to enjoy on Netflix next month once the kids go to sleep.

More Like This
'Wednesday' Creators Say They're "Talking Amongst Ourselves About Season 2
'Workin' Moms' Has An Official Release Date For Its Final Season
'Virgin River' Has Wrapped Filming Season 5 & OMG Is Charmaine Still Pregnant!?
Netflix Just Dropped The Bombshell Trailer For 'Harry & Meghan'