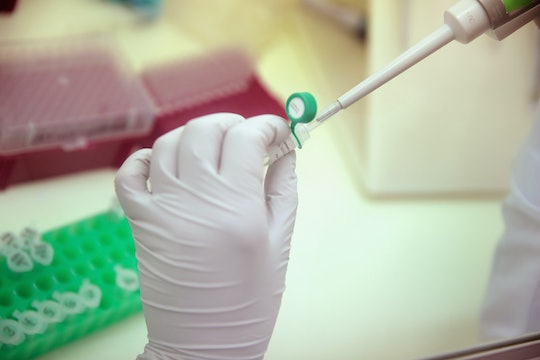 4 Myths About Zika Disproven, Because We Need To Take Precautions For Pregnant Women

The Zika virus has been widely covered in the news because of the devastating effects it can have on pregnant women and their children. But, like any phenomenon, it's been the subject of many conspiracy theories about its spread, its source, and its coverage. While some of these stories are borne from semi-fact, for the most part they modify and convolute scientific evidence and government involvement to the point of fantasy. That all may seem harmless enough, but the propagation of these stories undermines the seriousness of the disease and guts the public will to demand more research and more protection from the virus. When it comes to Zika, ultimately any inaction or misinformation will harm women and their babies. Here are four myths about Zika disproven because we need to take precautions for pregnant women.

There have always been conspiracy theories, but in this era of social media and scientific skepticism, they are spread and distorted like wildfire. Some of the most popular are that Zika is spread by genetically-engineered mosquitos, birth defects linked to Zika are actually caused by Monsanto, Zika is spread not by mosquitos but by vaccines, and it is all a plot hatched by big pharma to make big money.

According to The Baltimore Sun, a survey given by the Annenberg Public Policy Center of the University of Pennsylvania found that 22 percent of more than 1,000 people polled thought Zika was spread by genetically-modified mosquitoes. It's easy to see how this rumor started. One of the methods proposed for combatting Zika has been to genetically modify its main carrier, the Aedes aegypti mosquito, so that it is no longer capable of spreading the disease. But, like a game of telephone, that message was somehow scrambled to read that the genetically-modified mosquitoes are in fact at fault rather than part of the solution.

According to The Atlantic, genetically modified mosquitoes may be the best option for combatting Zika, a disease that has been very difficult to track and contain. Molecular geneticist Nina Fedoroff and former U.S. Secretary of Agriculture John Block said as much in their piece in The New York Times. The problem, according to Arthur Caplan, a medical ethicist at the NYU School of Medicine, is getting people to agree to it. In that same piece in The Atlantic, he said:

The public fears genetic engineering. Nearly all politicians don’t understand it. I don’t think the issue is economic. It is ignorance, distrust, fear of the unknown, fear of prior efforts to use biology to combat pests which went sour. [...]

Chemical spray may be familiar, but it is a blunderbuss. Old technology [is] hard to aim, often misfires, and is hard to maintain. Genetic engineering of nasty insect-pests is a rifle—very precise, low risk to the user.

Myth 2: Zika Is Caused By Vaccines

The Annenberg Public Policy Center of the University of Pennsylvania found that 20 percent of the Americans polled believed that vaccines were the root of the Zika virus. While the anti-vaccination movement has quite a bit of traction in the United States, this theory was very popular in Brazil, where the Zika epidemic was first linked to birth defects. PBS reported on this commonly held belief and found it was based in a deep-rooted distrust of the government. One woman interviewed in the piece said that the Brazilian government was "pushing this story about the mosquitos because they’re worried about indemnity — they don’t want to have to pay everyone for the damage their vaccines are causing, it would be too expensive to tell the truth. So they say it’s mosquitos causing microcephaly.” She added that she didn't think it made sense that mosquitos were at fault because "the mosquitos have always been here and we’ve never had this problem."

The Brazilian government put out a statement to try to combat the rumors. They said, "it is totally false that an expired batch of rubella vaccines, rather than the Zika virus, has caused the microcephaly outbreak.” The link between Zika and microcephaly has been confirmed by their health ministry as well as the U.S. Centers for Disease Control.

The Annenberg Public Policy Center survey found that 19 percent of Americans polled believed that microcephaly was a result of pregnant women drinking water containing a pesticide designed to stop the spread of mosquitoes. This theory could be another case of telephone gone awry, but it also gained some traction when a group of doctors from Argentina put together a report that argued that the Pyriproxyfen, a common pesticide used in water tanks in Brazil, could be causing microcephaly. The key word there is "could."

The report merely put forth the theory without backing it up with any evidence. Regardless, the report caused panic in Brazil, and that panic quickly spread to the United States. According to The Wall Street Journal, scientists at both the federal Ministry of Health in Brazil and in the United States denounced the claim as false, yet it has still managed to survive.

It's easy to demonize and suspect pharmaceutical companies. They do not have the best reputations for being forthcoming, and they've got a lot of power, a lot of capital, and a huge influence on people's lives. While it seems to make sense that Zika could be a moneymaker for big pharma, the theory falls apart with closer inspection. First, there is no vaccine for the Zika virus, so there is no way pharmaceutical companies (as of now) could benefit from it. Second, there are very few companies taking on the development of a vaccine, according to Fortune, because it is such a difficult virus to track and study. What's more, like the vaccines for other mosquito-borne diseases, this one would not be lucrative. Like vaccinations for yellow fever and dengue fever, it would need to be cheap and easily distributed to be effective. In short, it would not make sense for Zika to be a big pharma conspiracy because they have so little to gain from it.

Scientists, policymakers, and citizens fighting for action on Zika are mired in a very politicized issue that has been wracked by misinformation, fear, and distrust. The shame is that the most vulnerable members of society will pay the price. Spreading myths and conspiracies about Zika is not only ignorant and harmful towards efforts to study the disease, but it also slows down efforts to stop its spread.