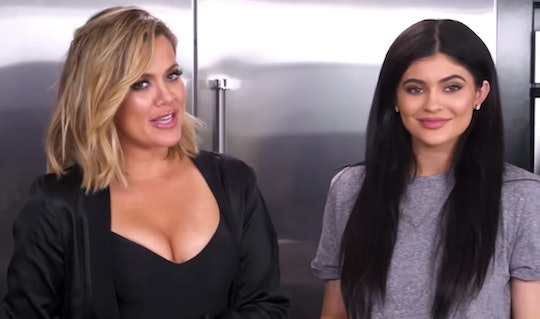 It's been more than two months since news of the Kardashian-Jenner sisters rumored pregnancies first broke, and frustratingly, the public is no closer to the truth than they were in September, leading fans to wonder if there's a reason Khloé and Kylie won't address the pregnancy rumors once and for all, so we can get on with our lives. How long can they keep us dangling in the wind, and what's the point? If they are pregnant, wouldn't it be easier to just say so, and ask for privacy if that's what they want? And if not, just post a bikini shot with a recent newspaper and put an end to the speculation, right?

That isn't to say that what is or isn't in a stranger's uterus (or even one belonging to someone you know) is anyone else's business, and although they're in the public eye, reality stars don't actually owe their fans anything. But look who we're talking about, here. This is a family that's invited camera crews into their homes for the last 10 years, and seems perfectly willing to overshare every aspect of their lives with the public at large. Less than two years ago, Khloé was happy to describe her genitalia to Howard Stern in great detail, so what's the difference? Here are some theories:

The better the ratings for Keeping Up With the Kardashians, the longer it's on the air, and the more money they make. As BuzzFeed and Refinery 29 have pointed out, there's precedent for the family refusing to reveal big news anywhere other than on their own show. See, for example, Kourtney's third pregnancy, Kim's second pregnancy, and the 11 months fans waited for confirmation that Kylie's lips were, indeed, fake, according to BuzzFeed.

We know that big sister Kim had two high-risk pregnancies due to a medical condition, and it could be that both Khloé and Kylie are pregnant, but they're waiting to share the news until they're sure that the pregnancies are viable (you know, like what practically every other woman already does). It could also be that they're currently trying to get pregnant, or that one or both of them was pregnant, and now isn't, for whatever reason, and it's painful for them to discuss it. When the public demands to know whether they're pregnant, they could also be unknowingly demanding details about an abortion or miscarriage that they have absolutely no right to ask for. (We have no evidence of either of these things, just like we have no evidence of a pregnancy. Neither Khloé's nor Kylie's reps have responded to requests for comment regarding their rumored pregnancies.)

All eyes are on Kylie and Khloé's social media accounts, but who's actually out there doing interviews? Kim and Kris. Yet every time they're asked, they refuse to address the rumors about their family members, because it's not their news to share. During a recent Ellen appearance, Kim all but told the host to invite her little sisters on the show, telling her, "We respect each other's right to speak for themselves, so I will speak about myself. Hopefully they can come on and address whatever rumors you might have."

Sure, they've grown up on TV, but whose choice was that, exactly? Kylie was only 10 when the show premiered, and although Khloé was old enough to opt out, that might have led to her being ostracized, à la Rob. Maybe they're in a place now where they just want to have one thing that they don't share with the world, and perhaps prevent their alleged children from living under a microscope.

Whatever the reasons are for the sisters to keep their business to themselves, the point is, it's their business. They can have 12 secret babies apiece, or they can use their reproductive choices to advance their careers, or anything in between, but in the end, they're not going to reveal anything until they want to, so maybe stop fretting about it for a while... at least until the midseason finale.