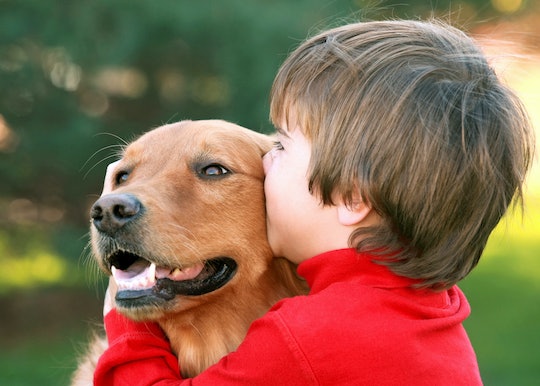 4 Reasons Why Big Dogs Are *The Best* For Kids, According To Science

Big dogs can be the absolute best. Whether you want a running companion or a big ol' couch buddy, there's so much to love about giant pooch. But when you add kids into the equation, are big dogs the right fit? It turns out, a big canine might just be the smartest thing you ever give your little human(s). Here are 4 reasons why big dogs are the best for kids, in case someone in your home needs a little convincing!

Now, I know this can be a dicey subject, since people who own small dogs will sometimes fervently defend why their particular breed is best. But if you look at the science, and yes studies have been done on this, big dogs are statistically better in three key categories, according to Psychology Today, reporting on research done at the University of Veterinary Medicine Vienna.

The study was based on statistical analysis of a 237-question survey completed by more than 1,200 dog owners in Vienna, according to Psychology Today. The findings revealed that small dogs (classified as weighing less than 44 pounds) "are seen as less obedient, more aggressive and excitable, and more anxious and fearful," than larger dogs, according to Applied Animal Behavior Science.

If you have children, the fact that bigger dogs tend to be more obedient and less aggressive and anxious is definitely a good thing! Here are four more reasons why a big dog might be best for your kiddos.