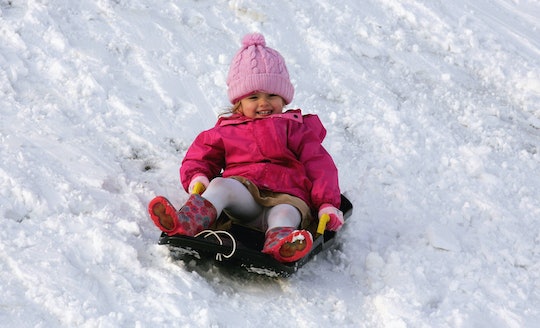 For those of us who live in cities with a full range of seasons, winter is now definitively in full swing — and with the dropping temperatures comes an understandable uptick in parents' worries about keeping kids safe and healthy. If you're trying to make it through the year without feeling the worst effects of cold and flu season, here are four studies about keeping kids healthy during the winter that are well worth a read.

First of all, you'll want to make sure that kids are getting enough exercise despite the colder weather — that's 60 minutes a day, according to the Centers for Disease Control and Prevention. It's easy to let playtime slip in the colder months, but exercise will give immune systems a healthy boost. You'll also want to make sure your kids are getting their daily dose of fruits and vegetables, since a healthy diet has also been linked to a healthier immune system.

Outside of those preventative basics, however, what else can you do to keep kids healthy during the winter? If you're worried about an increase in illnesses in the winter, you'll want to check out a few of the studies below:

Kids Should Be Getting The Seasonal Flu Vaccine Every Year

While it frequently gets lumped in with the common cold, parents shouldn't underestimate the flu. Influenza can lead to serious complications fairly quickly — especially in young kids — which can send them to the hospital. According to the CDC, there have been as many as 710,000 flu-related hospitalizations and 56,000 flu-related deaths in the United States alone since 2010.

Anyone over the age of 6 months old should be getting the seasonal flu vaccine every single year. Need more convincing? One study published earlier this year found that fully vaccinated kids have a 60 percent lower chance of being hospitalized due to flu-related conditions. Even partially vaccinated children have a 39 percent lower chance of hospitalization. And yet, CDC estimates put the number of children vaccinated against the flu at only 59.3 percent in the United States which is below target levels and makes it easier for the flu to spread.

The Weather Itself Won't Make Your Kids Sick

If you're worried that the snowy weather outside might lead your kids to catch a cold, you can safely stash those fears away. While a study carried out in 2014 found that the common cold may actually spread more effectively in cold weather, the low temperatures themselves aren't what cause disease. The cause is still just the virus itself — so if your children are washing their hands properly and often, they should have no problem going outside to enjoy the winter wonderland outdoors.

As Ellen Foxman, assistant professor at the Yale University School of Medicine, put it for Popular Science last year: "If the virus isn’t in your nose, it can’t cause infection."

If your kids are younger than 6, chances are they shouldn't be taking any cough or cold medicine when they're under the weather. It's unlikely to help them, and the side effects can present very real risks (of serious harm or death) for children. According to the Food and Drug Administration, kids under 2 shouldn't be given any cough or cold medicine at all, and parents should be careful when it comes to giving children older than that medication, as well.

Instead, consider using a nasal saline drop or cold air humidifier for cases of congestion, and honey for sore throats and coughs, as Slate recommends. But, as always talk to your pediatrician first.

Don't Try & Protect Them From Everything

Getting your kids vaccinated against the flu is definitely a wise choice every year. But if your kids are daycare-aged, they're still likely to bring home a few illnesses. Not only is that OK, but it actually might help them out later in life.

Studies carried out in 2002, 2010, and 2016 all found that, at age 2, kids in group care tend to get sick more frequently and earlier in life than kids who stay home. However, just a couple of years down the line, those same kids are less likely to get sick.

"We think if you are infected at an early age you build up immunity against these viruses or bacteria," Marieke de Hoog, an epidemiologist at University Medical Center Utrecht, told The New York Times last year. "There is even a possibility that the protective effect we have seen will continue when children grow up — we need more research."

With a bit of preventative preparation and the right information on hand, families can get through even the colder months of the year without too much fuss. Here's to ringing in the new year happy and healthy!